‘When I Find You’ by Emma Curtis 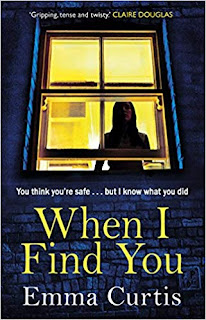 Quite a few people, especially as they grow older, have problems in tying names to faces and vice versa. But there are people who have this problem in an extreme form from birth and this is known as face-blindness, the technical term for which is prosopagnosia. And this is what Laura Maguire suffers from. She cannot even recognise her own mother. It is not a mental health nor is it a function of poor memory; it is connected with the way in which the brain receives and processes visual information: when it comes to faces it does not. Although that does not apply to brain function with other forms of visual information.

Laura’s own family are aware of this disability and cope with it although it does make life difficult. But only one person in the small but highly successful advertising agency, Gunner Munro, where she works as Art Director, knows. That person is Rebecca Munro, who owns the agency jointly with the charismatic, forceful David Gunner. Unfortunately for Laura, a key element of her job is establishing rapport with existing and possible clients, an extraordinarily difficult task for someone who cannot distinguish strangers from work colleagues. Nor is Rebecca particularly sympathetic to Laura’s predicament: she tells Laura that she must go to the office party and fraternise, otherwise her job will be at risk. So, Laura goes, has too much to drink and ends up in bed with . . . someone. Someone who was wearing a pink shirt. But when Laura wakes up in the morning with this someone, he was wearing a blue shirt. And he leaves before she can work out whether it was a colleague and if so which one. And the next day the office is devastated to hear that one of their colleagues, the much-loved Guy, has been killed while cycling home after the party. Guy’s death was an accident; nonetheless someone was responsible. Could it have been someone who was at the party? Meanwhile Rebecca has her own problems. For years she has been having a secret affair with David Gunner. It just so happens that David’s wife Felicity is a close friend of Rebecca’s. Now Rebecca is pregnant, and her plan is that David will leave Felicity and their children for her. But will he? Or will his inflammatory nature make an already combustible situation even more so?

The combination of Guy’s death, the Rebecca/David/Felicity situation, and Laura’s search to establish just who it was with whom she spent the night makes for a highly suspenseful narrative which ends, as the reader knows it must, in violent tragedy.

The essence of psychological suspense is that, whether or not there is a mystery at the outset which needs to be resolved as there is in this case (ie. just who did Laura have sex without true consent, ie rape), that the reader knows that there will be a violent outcome. For readers of the ever-popular psychological suspense genre, this is particularly recommended.
-----
Reviewer: Radmila May

Emma Curtis was born in Brighton and brought up in London. Her fascination with the darker side of domestic life inspired her to write One Little Mistake, her first psychological suspense. She has two children and lives in Richmond with her husband.
Find her on Twitter: @emmacurtisbooks