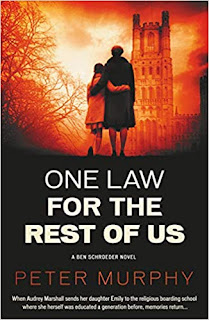 In spite the cold and damp Cambridge evening, a good turnout of local crime fiction fans (and some from further afield) gathered in Heffers’ pleasantly warm basement for the launch of Peter Murphy’s latest book in the Ben Schroeder series,
‘One Law for the Rest of Us’.
Peter, a familiar visitor to Heffers, gave some background to the series, explaining that he writes about matters that capture his interest and curiosity. His interest in the Cambridge Spies resulted in ‘Is There Honey Still for Tea?’ and another area of interest, addiction, was dealt with in ‘Calling down the Storm’.
‘One Law for the Rest of Us’ considers some key themes in the world currently.  Peter felt that he had to get to gips with the distressing but unavoidable subject of child abuse, both in this country and worldwide.  In the UK, the historical cases are very much the legacy of Savile and Peter’s judicial experience (having been a judge on a number of such cases over an 18-month period) have given him deeper knowledge and experience than most.
The novel, interestingly, discusses the idea of traumatic amnesia, the idea of recovered memory, which has been controversial, but did feature in an actual case.  Peter made it clear that he was scrupulous in ensuring that any ideas that arose from trials were very carefully used and not traceable.  He summed up by referring to the quote on the back cover, “There is no scandal so serious that trying to cover it up will not make it worse” (a sentiment that recent high profile enquiries support).

The photo shows Peter and Radmila May 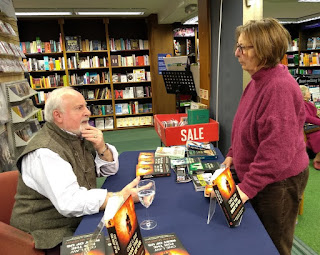