‘The Story Keeper’ by Anna Mazzola 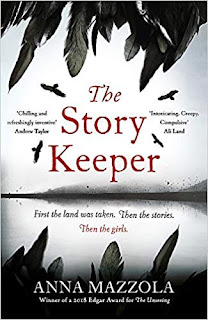 In 1857 a young woman, Audrey Hart, comes to the island of Skye in the Inner Hebrides off the north-west coast of Scotland. She has a job, unusual at that time for a young woman from a prosperous middle-class background; her father, a successful London doctor, had been deeply disapproving and had made it clear that his daughter should either make a suitable marriage or confine herself to charitable work while her stepmother reinforced her husband’s wishes firmly. But Audrey had never fitted into the social class in which she found herself and longed to return to the part of the world from which her own mother, a Highland Scot, had come. From her mother Audrey had learned many legends of the Gaelic-speaking crofters and even a smattering of Gaelic and had joined the Association of Folklorists and it is in answer to an advertisement in the Association’s journal for an assistant to a lady collector of folk tales on the island of Skye who could speak both English and Gaelic that Audrey has come to Skye without her father’s consent. When Audrey gets to Skye she discovers that the lady collector is the elderly Miss Buchanan who is crippled and consequently cannot get out herself to collect the stories from the crofting folk and she is counting on Audrey to do so. But times have changed since Audrey as a child had gone with her mother to collect folk tales; in the Highland Clearances whole communities were summarily evicted from their homes to make way for new trends in farming, such as sheep farming, or even letting the land for shooting. Speaking the Gaelic was sternly discouraged, and the old tales were deeply disapproved of by the Calvinist-inclined clergy. So Audrey is at first identified by the crofters and finds it difficult to establish any sort of rapport with the poverty-stricken crofters. But she is supported by Miss Buchanan’s nephew Alec who is also interested in folklore, and by one of the maids, Mairi, and gradually begins her collection. But these stories are not the sugar-sweet confections that were being published for children by writers such as Andrew Lang; they are much harsher and clearly have their origin in pre-Christian mythology. One constant them is that the fairy folk, the Sluach, take the souls of those who have died so that when the young girl Isbeal McKinnon is found drowned by Audrey, the minister will not allow her burial in the churchyard. And then Mairi also disappears. The crofters believe that they and a number of other girls who have disappeared have indeed been taken by the Sluach, but is that really what has happened? Or is there some more mundane, although equally horrifying, explanation? Have they been abducted and then perhaps murdered?

This a fascinating and vivid story in which the wretched poverty of the crofters’ contrasts with the rich inheritance of their legends while few if any of the landowners who exercise such power over them have any concern for their fate. Recommended.
------
Reviewer: Radmila May

Anna Mazzola studied English at Pembroke College, Oxford, before becoming a human rights and criminal justice solicitor. She now tries to combine law with writing and child wrangling, to varying degrees of success.  She is drawn to peculiar and dark historical subjects. Her novels have been described as literary crime fiction or historical crime. Anna's influences include Sarah Waters, Daphne Du Maurier, Shirley Jackson and Margaret Atwood. Her debut novel, The Unseeing, is based on the life of a real woman called Sarah Gale who was convicted of aiding a murder in London in 1837. Her second novel, The Story Keeper, follows a folklorist’s assistant as she searches out dark fairy tales and stolen girls on the Isle of Skye in 1857.