‘The Gilded Ones’ by Brooke Fieldhouse 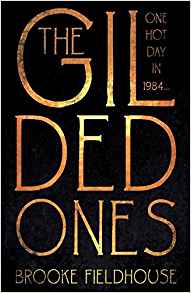 Pulse, the protagonist and narrative voice of The Gilded Ones, is a northern designer who had previously relocated to London and is now looking to advance his career.  The book plunges the reader into Pulse’s disturbing dream on the night before he is due to travel to an interview on the south coast.  In his dream the narrator witnesses a fatal car crash and attempts to assist the passengers only to be confronted by the sight of one of the victims, Freia, hovering above the snow-covered earth on which she has just perished.  The dream haunts Pulse both during and after his interview, and although he is successful, he spots another position on his way home to London.  He feels compelled to call the firm the moment he arrives back at London Victoria Railway Station and is interviewed and offered the post that same evening.  Pulse accepts the second job – not quite knowing why.

This surreal opening prepares the reader for a story in which supernatural and     macabre events perplex the young man who finds himself confronted by a series of bizarre coincidences that lead him ever closer to the discovery of a murder.  As the narrative unfolds, Pulse finds himself drawn into apparently disparate worlds, but as he begins to make connections between them, he realises he is caught in a web of intrigue.

Brooke Fieldhouse has created a fascinating and discomposing novel that delights in putting the protagonist and the reader off-balance.  The first-person narrative provides an immediacy and realism that belie the paranormal elements of the plot.  The layering of different communities and the unexpected networks that are revealed in the text reflect the social, economic, geographic and cultural landscape that characterised the heady but volatile days of Britain in the 1980s.  The specific reference to “One hot day in 1984…”  recalls Orwell’s dystopian fantasy - appropriate for a novel in which an unpredictable narrative voice describes his encounters with volatile, and at times phantasmagorical, characters and settings that are consistently disorientating.  The amalgam of fantasy and crime fiction is thought provoking, intriguing and highly entertaining.
------
Reviewer: Dot Marshall-Gent

Brooke Fieldhouse, designer turned author, has been dabbling since 2010, but has had short fiction published regularly since 2014 on Fiction-on-the-Web, and in Writing and Scribble Magazines. The Gilded Ones is Brooke's debut novel.