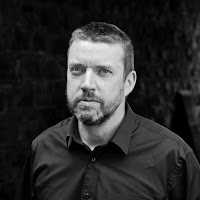 On Friday 21st September Liam Mcilvanney was revealed as the winner of the McIlvanney prize 2018 at the opening reception of the Bloody Scotland International Crime Writing Festival for The Quaker published by Harper  Collins. In 2016 the prize was renamed in memory of his father, William McIlvanney, who is often referred to as the Godfather of Tartan Noir. Last year’s winner Denise Mina handed over the engraved decanter and a cheque for £1000. The award recognises excellence in Scottish crime writing and includes nationwide promotion in Waterstones, and is presented annually at the Bloody Scotland International Crime Writing Festival, which is held in Stirling.

Following the ceremony guests formed a torchlight procession (with Bloody Scotland branded umbrellas at the ready) through the streets of Stirling led by Val McDermid, Denise Mina and Liam McIlvanney.

There was a range of fascinating panels on offer commencing at 10.30 am. The final panel was advertised as 9pm-Late!

As there were three panels running concurrently throughout the day, it was a tough choice.  I started with Above the Law.
Steve Cavanagh and Tony Kent. Chairing the event was Neil Broadfoot. It was advertised as:
Meet two legal heavyweights – and former boxers

Steve Cananagh hails from Belfast and has written four books, The
Defence, The Plea, The Liar, and Thirteen, featuring Eddie Flynn, ex-lawyer and ex-conman.  Steve says he has written every evening for the last 5 years. He has always wanted to be a writer and said he is a lawyer by
mistake. It was at age 36 that that he started to write in earnest. His next book Twisted Book is scheduled to be published in January 2019.

Tony Kent is the author of Killer Intent, featuring barrister Michael Devlin, who comes from a criminal family. His second book Marked for Death will be published in February 2019.  He is currently working on book three.

12.15 was Taking Over the Reins, with Felix Francis and Stella Duffy,  following in the footsteps of two of the biggest names in Crime fiction. 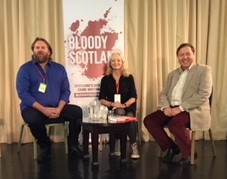 This was a very lively, interesting and fun panel.  Felix told us how it happened that he took over from his father the legendary Dick Francis.  ‘By accident’. His parents Mary and Dick Frances had, as everyone now knows, written the books together, although as Felix went on to explain it was very much a family affair. At breakfast Dick would pose a question to the family as to how the current hero could extricate himself from a certain situation and then when they all reconvened for dinner the solutions and ideas would flow.  Felix had for many years managed his father’s financial affairs, and following his father’s retirement from writing, a lunch with the Literary agent to discuss the re-issue of the backlist raised the possibility of a new book to stimulate sales. Felix was none-too keen for someone to take over and suggested to the agent he had a go himself. If you get the chance to hear Felix
speak, he is an incredible raconteur, being both interesting and amusing. He has now written 12 books his latest being Crisis, which I can attest is very good.

Stella Duffy, born in New Zealand, is a well-established author having written 16 books. She is also an accomplished actor. She tells how delighted and apprehensive she was when contacted to finish a book
started by the late great Ngaio Marsh, also from New Zealand, who wrote 32 first class thrillers.  As Stella puts it, ‘A huge wonderful scary challenge’.  She said there were four bits of chapters, written, a tiny outline but no whodunit, in all about 5000 words, which gave her scope to write. The book is entitled Money in the Morgue. Needless to say, I bought both books immediately after the event. The meeting was chaired by Craig
Sistarson
At 2pm I again presented myself at the Golden Lion ballroom to hear Ruth Ware, Mel McGrath, and Caroline Michell discuss
Family Secrets 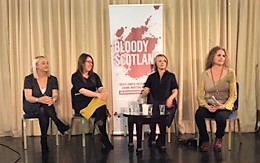 Ruth Ware has written 4 psychological thrillers: In A Dark, Dark Wood, The Woman in Cabin 10, The Lying Game and the Death of Mrs Westaway. Coming in September 2019 is The Turn of the Key. She made a wonderful comparison to TV
family series US v UK. She said in in America they have Little House in the Prairie, The Waltons, The Brady Bunch and the Simpsons. We, she said, have Eastenders!
Mel McGrath is the founder of that wonderful group Killer Women.  Mel said that all families have secrets and lies. Her book Give Me the Child is billed as compulsive, dark and devastating.  She talked also about criminalising kids. She told one story of a kid she visits in prison who started out dealing dope and is now serving 8 years for
attempted murder.
Caroline Mitchell is originally from Ireland, but now lives in Essex. She is an ex police detective. She said of all the things she dealt with, the worst was domestic abuse. She said that she is very nosy and used to live in Camden where her window overlooked her neighbours’ 2-bed flat in which lived a criminal family. My notes say she said they had 11 rottweilers, but I think I must have got that wrong. Caroline writes three series. There are three books available in two of the series, featuring DC Jennifer Knight, and Detective Ruby Preston. And one book so far featuring Detective Amy White, although there is a new book in this series Secret Child due out in 2019. Alexander Snkolaff chaired the meeting, observing that in the UK it seems that a woman’s most
dangerous place is in her own home. Stark words!

While I was sitting comfortably in the Golden Lion Ballroom at 2pm-3pm the Bloody Scotland Crime Writers Football Match was taking place on the hallowed turf of Cowane’s Hospital bowling green. I am not a football fan, in fact you could stick in your eye my interest in football and you wouldn’t notice it.  What did interest me is that it took place on a bowling green. Now I know and have visited a few bowling greens, their turf is like green velvet, they are nurtured, deeply loved, and respected – and they played football on a BOWLING GREEN.  I heard a rumour that Scotland won.

Meanwhile back in the Golden Lion Ballroom we were witness to The Kiwis are Coming, with  Fiona Sussman winner of the 2017 Ngaio Marsh award, New Zealand’s top crime fiction honour, for her novel The Last Time We Spoke. Also there was fellow Kiwi Paul Cleave, three-times winner of the same award. His latest book is A Killer Harvest. Liam Mclivanney this year’s winner of the Mclivanney prize, and Denise Mina, last years 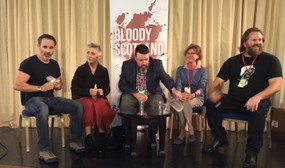 The event was chaired by Craig Sistarson. What a line up!  I have to admit that I was so caught up in the lively and
fascinating discussion on this panel and my notes are sketchy to say the least.  A few observations stand out.
Liam said that each novel he writes addresses a social issue. Responding to discussion on Denise Mina’s novel on real-life  killer Peter Mandal he asked, ‘How do you deal with real crime and incorporate it into crime fiction?’ He went onto say that he found it difficult to write about real crime as entertainment. Paul Cleave said ‘Do the issues naturally emerge as you write?’ and added ‘I never do anything but entertain. I like revenge writing best’.
Denise Mina observed that sometimes she thought she was writing about one thing, but it would turns she was writing something completely different. Then at times one finds that the reader has interpreted what you have
written differently again. Lots of writers take their stories from true crime. 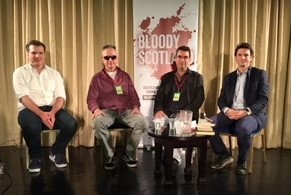 My last panel of the day was at 21st Century Spies.  Talking about this topic were, Mick Herron, who has written two series, the most recent being about the Slough House Unit. There are five books in the series, the most recent being London Rules. Although, I see there is a new book Joe County on the  Horizon for 2019. Mick was joined by Kevin Wignall, whose latest novel is To Die in Vienna, featuring Freddie Makin, and Matthew Richardson, whose debut book is My Name is Nobody . Asked how they go about writing a spy thriller, Mick said given the number of devices available in the spy technology world, he deals with it by ignoring it. If the hardware exists, you can make the software. He says it gives him a licence to make it up.  Kevin went a stage further and said that ‘If you can imagine it, it can be done’. He says he starts his opening page by seeing through Freddie’s eyes.  Matthew said he works it out first, then builds the house and hopes people will visit.

This panel ended at 6.30 and after five consecutive panels I was ready for a glass of wine and dinner.  I am aware that my report on the conference falls far short of the marvellous reports that Marsali Taylor has produced for Mystery People in previous years. I can only say it is a marvellous conference, well organised with varied panels and activities. I urge you all to register for next year.  20-22 September 2019