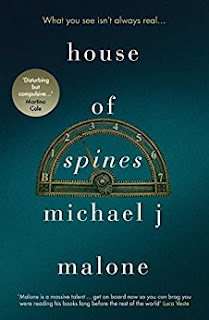 
Ranald McGhie is a struggling writer, churning out educational books for a pittance and living in a flat above a fish and chip shop.  His life is littered with personal tragedies.  Both of his parents died together in unusual circumstances, he struggles with mental health issues, and his marriage has broken down.  When he is informed that a hitherto unknown relative, Alexander Fitzpatrick, has left him a mansion containing an enormous library, the “House of Spines,” Ranald, understandably, experiences a mix of emotions.  His great uncle, it seems, was delighted to learn about Ranald’s literary leanings, and his will was made out to ensure that his treasured library would be handed on to someone who shared his love of literature.  Ranald is initially overwhelmed, but soon accepts that his fortunes have changed, and that he is now a wealthy man.  So far, so fairy tale, but not for long.

When Ranald takes up residence in his new home it is not long before he discovers that the house holds secrets that invade his dreams and threaten to destabilise his mental and emotional well-being.  Mr Fitzpatrick’s bequest includes a gardener and housekeeper, Mr and Mrs Hackett, who had served him with devotion for many years.  Tight-lipped and forbidding, the couple add to Ranald’s sense of disorientation as he negotiates his new-found prosperity.  Although they witness his physical and mental deterioration, they refuse to betray information about the family’s past that might help him to understand the malign effect that the house is having on him.  As the narrative unfolds, Ranald’s personality begins to disintegrate in a tumult of inexplicable and macabre events.

House of Spines is an unusual and engaging thriller, spiced with gothic terrors.  Malone has a gift for writing about the suggestibility of the human mind in a way that is both tantalising and terrifying!  A great read!
------
Reviewer: Dorothy Marshall-Gent

Michael J Malone was born and brought up in the heart of Burns' country, just a stone's throw from the great man's cottage in Ayr. Well, a stone thrown by a catapult, maybe. He has published over 200 poems in literary magazines throughout the UK, including New Writing Scotland, Poetry Scotland and Markings. Blood Tears, his debut novel won the Pitlochry Prize from the Scottish Association of Writers and when it was published he added a "J" to his name to differentiate it from the work of his talented U.S. namesake. He can be found on twitter - @michaelJmalone1