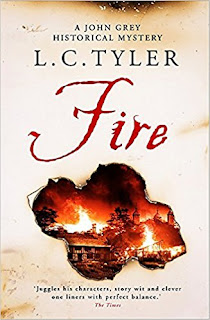 ‘In sixteen-hundred-and-sixty-six,’ goes the old rhyme, ‘London burned like rotten sticks.’ And, being built largely of wood with houses jammed together along narrow streets, it did. There was apparently a new contraption, a fire engine stored not in the City but in Clerkenwell for the use of the Clerkenwell firefighter with which water could be pumped into from the Clerkenwell Pipe House. Except that the director of the Clerkenwell Pipe House, a Mr Joseph Graunt, was away and took the only key with him. However, the fire engine could trundle through the streets of the City until it reached London Bridge where it was possible to pump water from the Thames into the fire engine via a waterwheel. Except that London Bridge was burning and with it the waterwheel. So, water could be pumped directly from the river into the engine. Except that the fire engine has slid down right into the Thames and is floating slowly away. Men with buckets are attempting to stem the fire but to no avail. London is being destroyed.

It is at this point that John Grey, the narrator of this fourth story in the author’s sequence of novels set in the seventeenth century, becomes aware of the fire. In his day job, John has a successful legal practice in Lincoln’s Inn. Now, however, he thinks he should join the ranks of the firefighters and on the way,  he discovers two men. One of them runs off, the other is dead, not from the fire but from a shot to the back. Now John needs to find a magistrate to report his discovery to. He does find a magistrate who is also Sir Felix Clifford, the father of the widowed Aminta Lady Pole with whom John is in love. But Sir Felix has been waylaid by a mob who are convinced that the fire must have been started by the French (who are at war with England, and who, being Catholics, are doubly likely to be villains of the deepest dye). Not that Sir Felix is a Catholic but his mistress, from whose house he has just emerged, is French. That being so, what more evidence is needed? John manages to deter the mob from killing Sir Felix but he does need to find someone of sufficient standing to whom he can report his finding of the dead man. And he can only think of one person: Charles II’s Secretary of State, Lord Arlington, for whom John has in the past worked under cover. Arlington tells John that someone has already been arrested, a Frenchman called Robert Hubert, in fact, not a Catholic but a Huguenot, who has admitted to being the fireraiser along with another man whom he shot. And that is the man whose body John has found. Arlington is by no means convinced that Hubert is the perpetrator and furthermore wishes to dampen down anger against Catholics: he himself is not one but Charles is known to be sympathetic to Catholics and the king’s many enemies dearly wish to blacken his name yet further. John, on interviewing Hubert feels that he is sufficiently deranged for his confession not to be taken seriously and, anxious that an innocent man not be hanged, he starts to try and uncover the truth. But John’s search for the truth leads him and his clerk and servant Will Atkins and also Aminta, who refuses to be left out, into real danger and into a world in which no-one, least of all Arlington and others of Charles’s inner circle of advisers, each conspiring against the other, can be trusted. Hubert is just a pawn in that deadly game, and John and his friends not much more. As we all know now, the fire started accidentally in a baker’s shop but at the time religious paranoia demanded a more dramatic explanation.

John is an excellent creation: an upright man, not to say somewhat puritanical and sanctimonious, and determined to serve the truth in the dark, uncertain world in which he finds himself. Will is loyal and supportive although somewhat bossy, while Aminta is equally bossy but takes a more flexible and practical view of matters. The narrative is gripping and historically accurate and enlivened with the author’s dry humour. He tells us that he finished the book just as the Grenfell Tower fire happened; the loss of life was far greater in that fire than it was in the Great Fire of 1666 and he has dedicated it to the firefighters of London. Highly recommended.
------
Reviewer: Radmila May

L. C. Tyler was born in Southend, Essex, and educated at Southend High School for Boys, Jesus College Oxford and City University London. After university he joined the Civil Service and worked at the Department of the Environment in London and Hong Kong. He then moved to the British Council, where his postings included Malaysia, Thailand, Sudan and Denmark. Since returning to the UK he has lived in Sussex and London and was Chief Executive of the Royal College of Paediatrics and Child Health for eleven years. He is now a full-time writer. His first novel, The Herring Seller's Apprentice, was published by Macmillan in 2007, followed by A Very Persistent Illusion, Ten Little Herrings, The Herring in the Library and Herring on the Nile. The first book in a new historical series, A Cruel Necessity, was published by Constable and Robinson in November 2014. Since then he has published three further books in this series. The latest being Fire. His latest Ethelred and Elsie is Herring in the Smoke