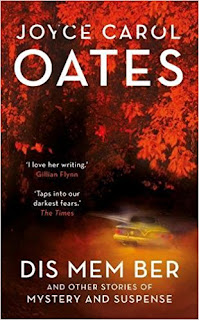 Dis Mem Ber is the first of seven chilling short stories, initially published between 2015 and 2017, and from which the collection takes its title.

The opening tale is related, with beguiling simplicity, through the voice of eleven-year-old Jill.  The child is enchanted by her bad-boy uncle and his sky-blue Chevy, but their disturbing relationship exposes how easily a young mind can be groomed and manipulated.

Crawl Space first appeared in Ellery Queen Mystery Magazine in 2016, and describes the increasingly compulsive behaviour of Brianna, whose controlling husband Jed died seven years previously.  The childless widow, still shackled to the memory of her late spouse, is compelled to keep returning to their old house - and towards the discovery of dreadful secrets from the past.

Sibling rivalry between two sisters, a series of dysfunctional relationships and the fascination that deadly weapons hold for some young people leads inexorably towards a disastrous conclusion in Heartbreak.

In The Drowned Girl another obsessive protagonist, Alida Lucash, becomes fixated on the gruesome death of a student and her own life is put in peril.  This is followed by The Situations - three vignettes that expose sickening acts of unbridled patriarchy, its perpetuation, and it’s terrifying impact when experienced by children.

The penultimate story, Great Blue Heron, recounts how a widow’s dependence upon her late husband leaves her vulnerable to a grasping brother-in-law and socially inept as she negotiates her sudden bereavement with friends and colleagues.  When she finally acknowledges her inner strength, the effect is surreal and violent.

Welcome to Friendly Skies! begins as a witty parody of the on-board instructions and guidance preceding a plane’s take off.  The flight attendant’s quips, however, soon plunge into gallows humour, and worse, leaving the reader heartily glad not to be a passenger on Flight 443 to Amchitka, Alaska!

Dis Mem Ber is a luscious smorgasbord of sinister stories whose characters are - or end up being - devastated, deranged or destroyed.  Oates writes, with unnerving precision, about fears that lurk within each of us, and her work exposes the complexity and fragility of the human mind.  The result is an anthology that is shocking, startling and unmissable.
------
Reviewer: Dorothy Marshall-Gent

Joyce Carol Oates was born 16 June 1938 Lockport, New York. She published her first book in 1963 and has since published over 40 novels, as well as a number of plays and novellas, and many volumes of short stories, poetry, and nonfiction. She is a recipient of the National Medal of Humanities, the National Book Critics Circle Ivan Sandrof Lifetime Achievement Award, and the National Book Award. She has written some of the most enduring fiction of our time, including the national best sellers We Were the Mulvaneys, Blonde, and The Falls. Oates has taught at Princeton University since 1978 and is currently the Roger S. Berlind '52 Professor Emerita in the Humanities with the Program in Creative Writing, and is the editor of New Jersey Noir.