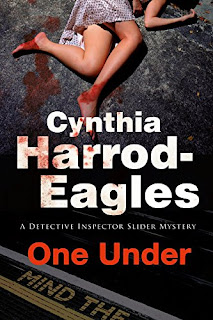 ‘One under’ is the somewhat euphemistic term used by London Transport staff to describe when someone has fallen under a Tube train, usually a suicide. That is how the opening chapter of this, the ninth in the Bill Slider series, begins when one morning a well-dressed man in his forties deliberately throws himself under an eastbound Central Line train at Shepherds Bush station. He is identified as George Pelopponos, a local government employee. Although one of Slider’s team, Jim Atherton, attends, Slider’s own attention is focused on the suicide of one of his colleagues: depressed at the loss of not just a colleague but a respected friend, Slider is relieved when a call from Uxbridge Police Station asks him to come out to a hit-and-run fatal accident in Harefield, on the edge of London and way out of the Slider team’s area. Except that the girl has been identified as Kaylee Adams from the White City Estate which is Slider’s patch. Feeling like a change of scene to take his mind off his colleague’s death and curious as to why a girl of only 15 was away from Shepherd’s Bush, Slider and Atherton go out to Harefield. Once there, they do have some doubts as to whether the death really did result from a hit-and-run or whether it was simply arranged to look like one. And their doubts are increased when the autopsy indicates that the death was not the result of a road accident but could have resulted from a fall from a considerable height. Enquiries at Kaylee’s home reveal an all too familiar situation; mother a drug addict, attendance at school minimal, she and younger sister Julienne left to their own devices which in Kaylee’s case involved going out with her friends Tyler Vance and Shannon Bailey, Tyler from a children’s home, Shannon from a dysfunctional family. But Tyler had been found dead in the river some time ago, the mystery of her death never satisfactorily explained, and Shannon, who had been living with her prostitute sister Dakota, has disappeared. However, Kaylee had admitted to another friend that she now had a boyfriend, a much older man who gave her money. Eventually it emerges that the girls used to go to parties at a Member of Parliament’s house in the exclusive area of Holland Park, and it becomes plain that these are parties where much older men sexually exploit these very young and vulnerable girls in return for a little money, drugs, alcohol, and attention. But it is all so very discreet that it is well-nigh impossible to obtain evidence of sexual intercourse with a person under the age of 16; and above that age sexual intercourse is not a crime and so there is nothing to prosecute. Slider is determined to bring these men to justice at least regarding the deaths of Kaylee and Tyler and he does establish that there was a link between the M.P. and George Peloponnos with evidence of corruption. But there are powerful interests even within the higher ranks of the police hierarchy who do not wish Slider’s investigation to proceed any further. 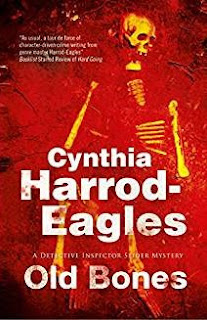 This tenth instalment of the Bill Slider mysteries begins with a retirement party for one of Slider’s colleagues. Between bouts of lamenting the demise of ‘old-fashioned coppering ‘and the effect of government expenditure cuts on the police, he lambasts Slider for his failed investigation into the Holland Park sex party scandal which had resulted in the arrests not just of the M.P. (Rex Marler) in whose house the parties had been held but for Assistant Police Commissioner Millichip. But both had been released without charge and Slider is persona non-grata in higher police circles particularly since news of the investigation had been leaked to the press, not by Bill Slider but held against him all the same. So, the finding of a twenty-year old skeleton buried in a back garden of a house in a quiet street in Hammersmith comes as a relief, less pressure to solve the case quickly. The skeleton is that of a young girl, aged about 13; there are no clues as to who she was or how she came to be there. The new owners of the house can shed no light on the mystery, nor can their immediate predecessors but a search through the missing person files comes up with a name: Amanda Jane Knight who went missing in 1990 from that address. There had been a somewhat lacklustre police investigation at the time which had never come up with an answer to Amanda’s disappearance. Eventually Amanda’s parents are tracked down; although her father died some time ago her mother is still alive and she refuses to accept that Amanda’s father could have been responsible for his daughter’s death. Amanda herself seems to have had few friends although she had become friendly with Melissa Vickery a girl at a nearby private school whose father had been a successful scientist. But he and his daughter, like so many in London, had moved away and are now living in the Cotswolds. Meanwhile, the Holland Park sex party’s affair has not gone away; one of Slider’s officers finds herself embroiled with dead Kaylee Adams’s little sister Julienne who, with her mother also dead, is in a children’s home and desperate for someone to show her some love. Shannon Bailey who had been a witness to her friend’s death has now gone back on her evidence, evidence that Peloponnos had been involved in a complex fraud with others including Assistant Commissioner Millichip.

In the end, the mystery of the skeleton in the garden is solved with a surprising yet satisfying twist and justice is achieved as regards to the fraud. Although the under-age sex party scandal (named Operation Neptune) is filed and will apparently not be proceeded with, I wonder if it will not re-emerge in a later volume. I hope so.

All in all, both these novels are a rewarding and enjoyable read. All the characters are lively and believable and the writer has a deft lightness of touch which makes reading a most pleasurable experience. Highly recommended.
------
Reviewer: Radmila May 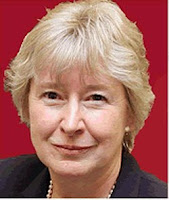 Cynthia Harrod-Eagles was born in Shepherd's Bush in London. She was educated at Burlington School, a girls' charity school founded in 1699, and at the University of Edinburgh and University College London, where she studied English, history and philosophy. She wrote her first novel while at university and in 1972 won the Young Writers' Award with The Waiting Game. Afterwards she had a variety of jobs in the commercial world, while writing during the evenings and weekends. The birth of the Morland Dynasty series enabled her to become a full-time writer in 1979. The series was originally intended to comprise twelve volumes, but it has proved so popular that it has now been extended to thirty-four.In 1993 she won the RNA Novel of the Year Award with Emily, the third volume of her Kirov Saga, a trilogy set in nineteenth century Russia, and she also writes the internationally acclaimed Bill Slider Mysteries.
Cynthia Harrod-Eagles still lives in London, has a husband and three children, and apart from writing her passions are music (she plays in several amateur orchestras) horses, wine, architecture and the English countryside.