‘A Murderous Mind’ by Jane A. Adams 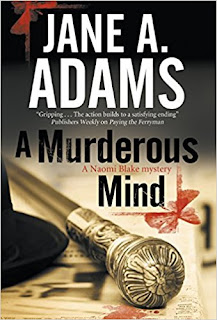 A Murderous Mind begins with an unsettling prologue that plunges the reader into the cold, calculating mind of a serial killer at the very moment he chooses a young female student to be his next victim.  He carries out her murder with meticulous attention to detail and breath-taking audacity - she is killed in her university bedroom whilst her friends are asleep just yards away.

The police team investigating the outrage soon discover similarities with a previous unsolved murder.  However, DI Tess Fuller and DS Vin Dattani, the C.I.D. officers leading the case, are unsettled when officers from Internal Affairs (IA) are sent in.  It transpires that the older case was led by DI Joe Jackson, notorious for his unorthodox policing methods, and now, posthumously, disgraced.  The officers who worked alongside Jackson remain tainted by association with the maverick inspector and the IA team are tasked with ensuring that the current investigation runs smoothly whilst, simultaneously, scrutinising the previous case for evidence tampering.

Naomi Black and her husband Alec knew Jackson before they retired from the police service and are both interviewed about their erstwhile mentor and supervisor.  Consequently, the Blakes and their close circle of friends are drawn not only into the inquiry, but also into the frightening and surreal world inhabited by the murderer.

The thoughtfully structured novel ensures that the reader is quickly immersed in the drama of the narrative and then kept on tenterhooks as events rapidly unfold.  The horrific modus operandi used by the killer, although shocking, is not gratuitous, and reflects the psychological element suggested in the novel’s title.  A taut, well-structured plot propels the characters, and reader, relentlessly towards a surprising denouement.

A Murderous Mind is the ninth Naomi Blake mystery but is easily read without knowing what went beforehand; moreover, I am now intrigued to learn how Naomi’s life in crime began, and look forward to her first adventure.  An excellent read!
------
Reviewer: Dot Marshall-Gent