‘The End of the Day’ by Claire North 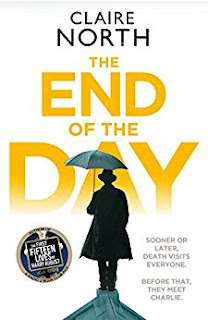 The End of the Day is a novel in which grotesque personifications of the four horsemen of the apocalypse - Death, Famine, Pestilence and War - visit and consume continents, countries, regions and villages as the world slides towards apocalypse.  Into this threatening scenario stumbles Death’s unassuming employee, Charlie, The Harbinger of Death and main character in the story.  His adventures and contemplations provide the landscape through which the fog of death curls, contaminates and kills.

Charlie travels the world meeting people either to herald their imminent demise, offer a warning that may prevent their untimely death or, simply, to extend a “courtesy” on Death’s behalf.  The novel frequently
juxtaposes the commonplace with the unimaginable.  So, for example, Charlie is regularly sent to places of devastation and depravity, but the office dealing with his assignments is based in Milton Keynes.  Similarly, Charlie frequently finds himself in bizarre and deadly situations, but, when his mission is accomplished, he returns home to a small flat in Dulwich, South London.

The novel highlights the impact of modern phenomena on individual lives.  It moves effortlessly between the intensely personal and the global, through a series of surreal episodes that track Charlie’s journeys.  He is sent to a remote village to visit a dying woman who is the last exponent of her people’s language.  He meets an elderly man and his grand-daughter who face eviction because the block of flats they live in has been earmarked for a lucrative redevelopment.  On other occasions, he is dispatched to war-torn regions of the Middle East and Africa, takes a road/air trip through the United States, and almost dies whilst struggling across the melting glaciers of Greenland.

The End of the Day is not a crime novel, although it does deal with corporate, political and ideological crimes, as well as individual acts of brutality inflicted by human beings on other human beings.  North’spoetic prose is as beautiful as her subjects are disturbing, and within this context the ordinary-extraordinary character of Charlie becomes a latter-day Everyman, whose tale offers a chilling and thought provoking
consideration of the world we live in.
------
Reviewer: Dorothy Marshall-Gent 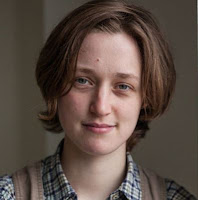 Claire North is a pseudonym for Kate Griffin and Catherine Webb. She was born 1986. She was educated at the Godolphin and Latymer School in London and the London School of Economics. She was 14 years old when she completed Mirror Dreams, her first novel which was written during her school holidays.  The book was published in 2002 by Atom Books, part of Time Warner (now Hachette Book Group), and Webb was named Young Trailblazer of the Year by the magazine Cosmo Girl. She has published eight young adult novels, all with Atom Books. In 2010 she graduated from Royal Academy of Dramatic Art. Webb prides herself on the scientific and historical accuracy of her Horatio Lyle books. She  also writes fantasy novels for adults under the name Kate Griffin. As Claire North, she has written two science-fiction novels.