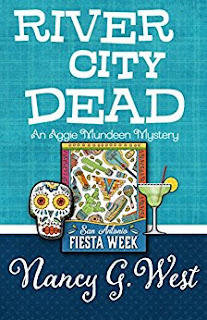 Aggie Mundeen, she of the ‘Stay Young with Aggie’ column, has arranged a rendezvous with Detective Sam Vanderhoven at the San Antonio River Walk Hotel.  They have booked the penthouse suite, and Aggie is looking forward to a blissful crime free
romantic long weekend.   The news of the body of a dead girl found in their penthouse puts paid to Aggie’s romantic ideas.

The girl is identified as a regular guest during Fiesta Week, and she is known to Aggie. While chatting to the maid Sara who found the body Aggie learns that the victim was a member of the Fabulous Femmes who are holding their convention at the hotel. They are split into sub-groups - the Madhatters, the Foxy Fixits, and the Flamboyants, who, Aggie learns are party girls, and they do get around.  As she chats by the pool she learns a lot about the Fabulous Femmes and some of what she learns is disturbing.  Even more disturbing is a conversation with her friend Grace.

Aggie learns that the victim had booked the penthouse for a ten day stay but decided to leave on the Sunday, hence the penthouse becoming free for Aggie and Sam or not as it turned out!  What was her reason for cutting short her stay?

The story is told from the point of view of both Aggie and Sam. Both investigating using different approaches. But most fascinating is the murder weapon which is ingenious and despite the clues, it came as a real surprise. Clever and tantalising, this is a good and enjoyable mystery.

Always good to catch up with Aggie and initially it looked as if things would go well with her and Sam, both have traumatic experiences in their pasts and have danced around each other for some time.  Would they this time move their relationship on to a deeper level?
------
Reviewer: Lizzie Sirett

Nancy G West was seven years old, when she and her mother wrote poems to each other on special occasions. In high school, the Library Journal Pegasus published Nancy’s poem. At eighteen, she realized she might have to get a real job.  She heard journalists were underpaid and English majors were selling lingerie, so she studied General Business at the University of Texas and University of Houston and earned a BBA.  A few years later, married, with two daughters, Nancy realized she had to study English literature and write. She read numerous books on writing and wrote articles, poetry, and the biography of artist Jose Vives-Atsara (Shoal Creek Publishers). She founded Book Publishers of Texas, edited their trade journal and promoted their books for seven years. While earning her MA in English literature at University of the Incarnate Word, San Antonio, she began writing Nine Days to Evil, a novel of psychological suspense, Shakespeare, and nonstop-action which won the Blether Gold Award. As West finished, Nine Days to Evil Meredith Laughlin’s story, Meredith’s “mature” graduate school friend, Aggie Mundeen, took over West’s consciousness. The result was the author’s creation of the Aggie Mundeen Mystery Series.