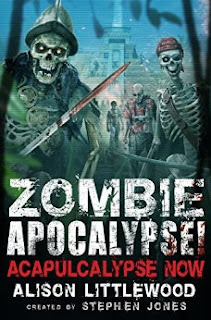 In a continuation of the highly successful series of ‘Zombie Apocalypse’ books created by Stephen Jones, comes this ghoulishly grim tale of a Mexican hotel succumbing to an attack by...well, you guessed it, zombies.

In typical disaster-movie style, Alison Littlewood sketches in the various larger-than-life characters in vivid prose...shortly before they all meet their various dooms. Well, most of them anyway. Think The Towering Inferno meets The Walking Dead (with more than a touch of Quatermass and the Pit thrown in) and you’ll get a flavour of what this story’s about. It’s set during the opening of the swanky Hotel Baktun in Acapulco (hence the tongue-twisting title) and in a very short time, the polished tile floors and limpid clear swimming pools become awash with blood and body parts.

Not being familiar with this series, at first I assumed this was aimed for young teen readers. But once the bloodletting starts, not to mention the swearing, I mentally re-evaluated the intended age group. Over 18s only I think! Littlewood’s descriptions of the Undead’s hunger for living flesh is intensely graphic, and she seems to delight in the forensic dismemberment of one holidaymaker after another. If you enjoy your horror movies bloody, then this is the book for you.

Being a continuation of a much larger narrative, there are plot threads that clearly segue into other books, but it never feels like you’re missing anything important. And there is enough in this volume to satisfy the most ardent zombie-lover. The cover (with its oddly too-tiny Mayan hotel) emphasises some fleetingly glimpsed piratical skeletons, which implies the book is tamer than it is. The real ‘meat’ of the book, however, is a mixture of gut-wrenching gore and jet-black comedy (“Human burrito,” one of the characters says as he watches zombies eating people tied up in hammocks). The author is clearly having a whale of a time, and transmits this to the reader.

Written in short, sharp chapters, and punctuated by moody monochrome illustrations, ‘Acapulcalypse Now’ reads like a movie script, or a graphic novel brought vividly to life. The action switches continuously between various characters as they battle against the odds, and if the ending seems a little rushed, that’s a small price to pay for such an entertainingly horrific read.
--------
Reviewer: Mark Campbell

Alison Littlewood was born in Chapeltown South Yorkshire. She is the author of three novels and her short stories have been included in numerous anthologies like The Mammoth Book of Best New Horror and The Mammoth Book of Best British Crime 10. She is the recipient of the 2014 Shirley Jackson Award for Short Fiction recognizing outstanding achievement in the literature of psychological suspense, horror, and the dark fantastic.
www.alisonlittlewood.co.uk 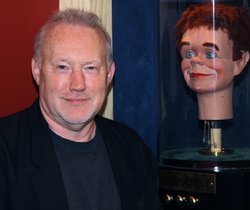 Stephen Jones lives in London, England. A Hugo Award nominee, he is the winner of three World Fantasy Awards, three International Horror Guild Awards, five Bram Stoker Awards, twenty-one British Fantasy Awards and a Lifetime Achievement Award from the Horror Writers Association. One of Britain’s most acclaimed horror and dark fantasy writers and editors, he has more than 140 books to his credit, including The Art of Horror: An Illustrated History; the film books of Neil Gaiman’s Coraline and Stardust, The Illustrated Monster Movie Guide and The Hellraiser Chronicles; the non-fiction studies Horror: 100 Best Books and Horror: Another 100 Best Books (both with Kim Newman); the single-author collections Necronomicon and Eldritch Tales by H.P. Lovecraft, The Complete Chronicles of Conan and Conan’s Brethren by Robert E. Howard, and Curious Warnings: The Great Ghost Stories of M.R. James; plus such anthologies as Horrorology: The Lexicon of Fear, Fearie Tales: Stories of the Grimm and Gruesome, A Book of Horrors, The Mammoth Book of Vampires, The Lovecraft Squad and Zombie Apocalypse! series, and twenty-seven volumes of Best New Horror. You can visit his web site at www.stephenjoneseditor.com or follow him on Facebook at Stephen Jones-Editor.
www.stephenjoneseditor.com 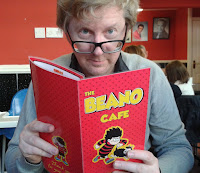