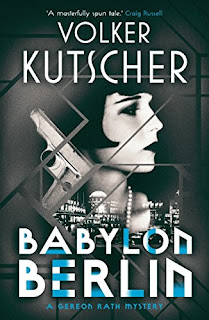 Berlin 1929. The city is seething. There is the wild world of sexual excess, pornography and drugs, made famous for many British readers by such novels as Christopher Isherwood’s I Am a Camera. There is political unrest, manifested in particular by the demonstrations and strikes instigated by the Communist Party, supported by Stalin’s USSR, but also riven by internal feuding factions drawn from the numerous Russians who fled the Soviet Union after the Bolshevik Revolution. Far-better organised than the Communists and attractive to many disillusioned former soldiers who have never accepted the German government’s unconditional surrender after World War I, there are the home-grown Fascists. There are extensive criminal networks which have organised themselves along territorial lines. The Berlin police can do little to control the situation and the Social Democratic Party which is the governing group in the city’s administration tries in vain to control the chaos.

Into this volcanic mix comes Inspector Gereon Rath, formerly of the Cologne Police Homicide Squad but now a member of the Berlin Police Vice Squad, not something he wants to do but after an unfortunate episode in his home town the only realistic alternative to quitting the police service. He does, however, like and admire his boss Detective Bruno ‘Uncle’ Wolter who, during a raid on a pornographic photographer, saves Rath from being shot and then lets the shooter go on the grounds that he could be a potentially useful informer. At the same time the police are having to deal with a Communist demonstration which, despite being banned, has gone ahead with the deaths of a number of demonstrators resulting from police overreaction. Meanwhile Rath’s landlady, Elizabeth Behnke, has asked him to look into the disappearance of one of her other lodgers, the Russian Alexei Kardakov, who owes her a month’s rent. Another Russian, Boris Karpenko, is also looking for Kardakov but when the body of an identified man is found in a car in a canal Rath recognises him as Karpenko. Rath is led into the morass of Berlin’s criminal underworld where one gang leader is looking for the Russian Countess Sorokin who is alleged to be bringing a fortune in gold out of the Soviet Union to finance one of anti-Soviet Russian groups. But there are many people who would like to get their hands on the gold for a variety of reasons. And they are all dangerous. And not all the people whom Rath thinks he can trust are in fact trustworthy. And his on-off relationship with Charlotte Ritter, a stenographer with the Berlin Homicide Squad, is another complicating factor.

This book is very long and full of incident with an enormous cast of characters, and this  English edition could possibly have benefitted from an introduction outlining the political situation in Germany at the time. But nevertheless an interesting read..
------
Reviewer: Radmila May

Volker Kutscher was born in 1962 in Lindlar, West Germany. He is the author of the enormously successful Gereon Rath crime series which, in addition to compelling narrative, is notable for its scrupulous accuracy on Germany in the years between its beginning in 1927 and the approach to the Second World War.