Elizabeth Edmondson’s Vintage Mysteries
An Appreciation
by Radmila May 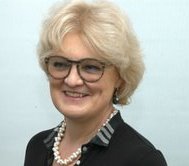 The writer Elizabeth Edmondson who died in Oxford in January 2016 at the age of 67 may not be known to many crime fiction readers. In fact she wrote about 30 novels and a number of novellas), 9 of which she
described as ‘Vintage Mysteries’ and which were set in the 1920s, 1930s, 1940s and 1950s written under her maiden name. Her writing is both elegant and witty – altogether highly enjoyable.

Her great friend Jean Buchanan, also an Oxford writer, has supplied information about Elizabeth Edmondson’s life. Born in Chile, her mother was Argentinian and her father came from Cumbria and was a journalist who became a diplomat. She herself was educated in Santiago, Calcutta and England and then went up to St Hilda’s College Oxford to read English before working briefly for the Civil Service and then for the publishers Macmillan where she met her husband, art historian and translator Paul Aston who died in 2011.

The two novels which come nearest to the definition of a classic detective story and which commence the Very English Mystery series are set in the fictitious town of Selchester and feature as detective the undercover Secret Service agent Hugo Hawksworth, his friend Freya Wryton, and his uncle, the Catholic priest Leo Hawksworth, and Hugo’s young sister Georgia, one of several feisty teenage girls who feature in these novels. The two Selchester novels have been longlisted for the 2016 CWA Endeavour Historical Novel Dagger Award and have sold very well, particularly in the United States. Elizabeth Edmondson’s other Vintage Mysteries are one-offs and include considerable mystery and suspense elements involving danger and violence. All her Vintage Mysteries, despite their varied locations, have characters which mostly come from an aristocratic and landed gentry background (often with notably dysfunctional families) reminiscent of the TV series Downton Abbey. So I was not surprised to discover that Julian Fellowes, writer of that series, was a childhood playmate. However, her attitude to the aristocratic etc background is rather more critical than that of Fellowes, and her belief in educational and career opportunities for women is clearly manifest in her writing. Currently the Hawksworth titles are available in print versions, the others only as e-books. Publishing details are below. Her son Anselm, writing as Anselm Audley, will be completing her next Hawksworth story.

A Man of Some Repute. In 1947 the Earl of Selchester, while hosting a dinner party in the ancestral castle, disappears in a raging blizzard. His fate is unknown, nor even whether he is alive or dead, but after 7 years he can legally be presumed dead. Then, in 1953, his remains are discovered buried in the castle’s chapel and it is clear his death was no accident. Hugo is asked to look into his death which he does, assisted by Leo, Freya and Georgia.

A Question of Inheritance. The new Earl of Selchester is the American Gus Fitzwarin who arrives at Selchester Castle to take up his inheritance much to the fury of Sonia, the previous Earl’s daughter who had expected to inherit all her father’s property. (For an explanation of how Gus’s existence was discovered see the non-crime novella A Youthful Indiscetion.) Gus is accompanied by his two teenage daughters, Babs and Polly. Sonia then appears, allegedly for Christmas, in fact, to grab items such as pictures which she claims are rightfully hers. She is accompanied by her ‘fiancé,’ the Tory MP Rupert Dauntsey, and an art expert, Oliver Seynton. But then Oliver is found dead and, once again, Hugo investigates with assistance from Leo, Freya, Georgia and her new cousins. The trail goes back to the previous Earl and that fatal dinner party in 1947 and the Earl’s less than savoury activities in post-War Germany regarding art treasures looted by the Nazis.

Voyage of Innocence. This is perhaps the most profound of Elizabeth Edmondson’s books. The voyage is not the voyage to India with which the book starts in 1938 but the life voyage on which the three young women embark when they arrive in 1932 at Oxford to read for degrees at the fictitious Grace College. Verity (Vee) finds herself drawn by her friendship with the idealistic Alfred into the Communist Party, both of them distressed and angered by the great and widespread poverty in the country. But Vee then finds that she is drawn into a much more sinister and threatening network from which she cannot escape. At the same time the empty-headed Claudia is attracted by the false glamour of Fascism and moves to Nazi Germany; only when she is there does she realise its bestial reality, and to help her Jewish friend escape has to put herself in deadly danger. Vee and Claudia have to draw back from the morally wrong choices they have made, no matter what danger they may be in. Meanwhile the American Lally (Lavender) while standing apart from British politics finds that what she thought would be a happy marriage is rather more difficult.

Fencing with Death.  Set in 1959, the central character is a young man, Larry Dunne from a comparatively modest background. He has ambitions to be a writer but at the moment works in a bookshop and writes unbelievably awful poetry. He is, like his friends including his ultra-posh girl-friend who actually prefers her horses, a Communist, and like them all totally ineffective. On an impulse he applies for and gets a job in Communist Hungary but once there he finds it very different from his idealised picture. Then a young woman in his block of flats is found murdered and it suits the authorities to accuse him and his life becomes difficult and dangerous. The author’s picture of the security apparatus of both Britain and Hungary is gently mocking; overall this book is the most comic of her novels.

Finding Philippe. In 1949 Vicky travels to France to find out what happened to Philippe d’Isere, a member of the French Resistance whom she married in 1943 and who then disappeared believed killed. Her tyrannical father, disapproving of her marriage to a Catholic and a foreigner, engages solicitor Julius Drummond to follow her and bring her back. Instead Julius assists her in her search. But someone is determined that the truth will not be found and will stop at nothing to do so.

The Frozen Lake. Westmoreland, 1936, in a bitterly cold winter. The story features two dysfunctional families celebrating a Christmas even more awful than the Christmases in her other novels and which ends in violence. There is a truly dreadful grandmother who will sacrifice anyone, even members of her family, to preserve the memory of her favourite son who died in World War I. The anti-Semitism and sympathy with Hitler which was evident at the time among the aristocracy is very much on display as is their arrogant snobbery. Will the younger generation escape the shackles of their environment?

Publication details of all the Vintage Mysteries are below,
including three with little or no crime element.