With only 13 days to go before we all head off to Bristol in the UK to enjoy the annual
CrimeFest conference,
I caught up with co-organiser and author Donna Moore. 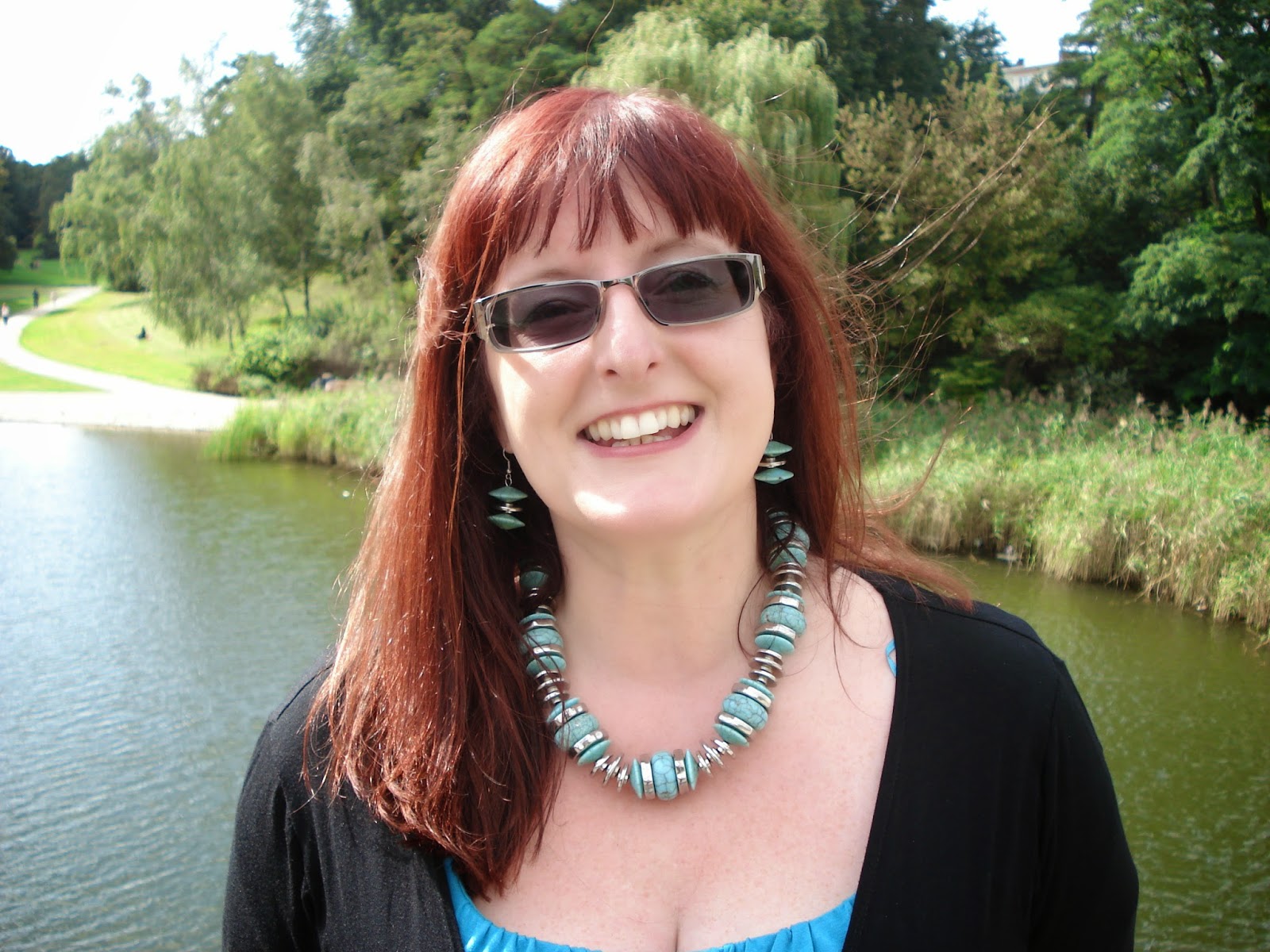 Donna Moore is the author of the novels ...Go To Helena Handbasket  and Old Dogs as well as a number of short stories which have been
published in various anthologies, including Damn Near Dead, Hell Of A Woman (both Busted Flush Press), Discount Noir, Pulp Press and online at Pulp Pusher. She has also been anthologised twice in the annual
Best British Mysteries.
After several visits to teach creative writing in yup'ik schools in tiny villages in the Alaskan Bush, Donna is now Writer in Virtual Residence for the Kuspuk School District.
Currently studying for a Masters Degree in Gender Studies, Donna also works full time as an adult literacies tutor at Glasgow Women’s Library.

A crime fiction fan from a young age, Donna wanted to be one of Enid Blyton's Famous Five and fight crime with the aid of only a basket of cucumber sandwiches and a bottle of ginger beer. She spent her spare time following mysterious strangers around the village - especially those with cockney accents and a couple of days' growth of stubble - until a complaint from the new local vicar put a stop to her sleuthing career.

Lizzie: Your first book Go to Helena Handbasket was published in April 2006.  It won the Lefty Award in 2007 for the most humorous crime fiction novel.  What inspired you to write a spoof PI novel?  Was it prompted by any particular person or event?
Donna: Well, I sort of became published by mistake. I was on an internet discussion group for readers of crime fiction and the group had been discussing all the cliches in crime fiction – you know: the heroine who goes down into the basement without weapon or torch when she hears a noise, the crime solving cat, the prologue written in italics from the point of view of the serial killer, the grumpy, divorced, alcoholic cop etc. and I decided to put them all into a short, and ridiculous, story to amuse the group members. So I did. And the commissioning editor for a small US publisher happened to be on the mailing list and emailed me, saying “If you’d consider expanding that, we’d consider publishing it". I immediately emailed back and said "Don't be so ridiculous," but then thought I'd have a go and see what happened. And Helena Handbasket was born. It was a lot of fun to write.

Lizzie: Go to Helena Handbasket was followed in 2010 by Old Dogs, can you tell us the background to the birth of Old Dogs, rather than a second case for Helena Handbasket ?
Donna: Every day on the bus on my way to work I would pass Glasgow’s beautiful museum and art
gallery. I often amused myself wondering how someone could break in (if any law enforcement people are reading this, when I say ‘someone’ I don’t mean ‘me’, obviously). One day, as I passed, I was reading a newspaper article about a pair of elderly Australian women who conned lots of people out of lots of money and lived the high life on other people’s cash and a lot of brass neck. I thought they would be the ideal candidates to break into the museum. So, of course, I had to go and see just how possible it would be. The museum in question is a lovely grand old building and one of the features inside, in some of the interior walls, are these big, fancy metal grilles. On my...ahem… ‘research’ visit...I was peering through one of the grilles into the dark tunnel beyond when there was a cough behind me. I turned round and a security guard stood there. “Can I help you...madam?” There was a pause pregnant with suspicion before the heavily inflected madam. I’m sure he what he actually wanted to say was “Can I help you...you maniac?”

“I was just looking through the grille. Why is it there?”

“It’s where all the pipes are. There’s enough room for the workmen to walk through.”

“Really?” I said. “That’s fascinating. And how, exactly, would a person get in?”

Again the suspicious look. “I’m not sure I should tell you.”

“Oh please tell me. I just want to know if you could hide in there when the museum was shutting, and whether the tunnels are interconnecting so that you could walk through them without getting spotted by the security cameras and...wait...why are you grasping my elbow so tightly and frog-marching me out of the museum...?”

So you see, when you have no skills or talents that would actually fit you for being a crime writer, it’s tough. Many of the writers I know have walked the walk -- police, FBI agents, lawyers, PIs, bodyguards, criminals and, in one case, possibly a spy (even though he doesn’t admit to it). They tell you to write what you know. At the time, I was a pensions consultant, which doesn’t quite make the grade, does it? What am I going to do...kill someone


one by boring them to death by reading them a set of actuarial tables?

Lizzie:                How did you become involved in the organisation of the CrimeFest conference?
Donna:               Now, it’s funny you should ask me that, because I actually have no idea. I became friends with Adrian Muller after we met at Left Coast Crime in Pasadena in 2003 and I was visiting him and Jen a couple of years later and he handed me one of his home made cocktails. “I’ve been thinking about putting on a Left Coast Crime in Bristol,” he said. I took a sip of my cocktail. “What do you think?” I took another sip of my cocktail. “That’s right. Drink up. And I was wondering if you might help. Just a little teeny tiny bit of help. Nothing much at all. Would you like another Martini?” Adrian does make exceedingly good cocktails (if rather strong) so, of course, I said yes. And, well, somehow, I ended up doing the programming. I have no idea how that happened. That was in 2006 and it was so popular that people asked if it was going to be repeated. And that’s how CrimeFest came about. For a few years I did my programming behind the scenes but then Adrian and Myles were kind enough to ask me to become a co-host, which was lovely of them. My biggest task is the programming but I get to do all sorts of other fun stuff, too. Adrian and Myles do all the hard work.

Lizzie: Tell us about The Broad From Badsville?
Donna: ‘I’m an old punk with a large collection of Doc Martens, a love of film noir, screwball comedies, 1940s and 50s pulp fiction.’

Lizzie: Despite your early aspirations to be one of the Famous Five, you did not as far as I know become a private eye.
Donna: A-ha, but how do you know that, Lizzie? Have you ever seen me and Nancy Drew in the same room? No, I thought not. I did actually interview a PI once and it’s not all mysterious dames and getting beaten up every five minutes. Apparently there’s lots of sitting around. It sounded like my sort of job, so I asked if he'd ever thought of employing a short, fat, unfit, middle aged woman with a bad knee and a fear of violence. He was kind enough to say that none of that would matter but my biggest stumbling block would be that I don't drive. I might need to chase people. I had a fleeting thought of getting on the Number 62 Bus and saying to the driver "Follow that car", but I concluded that the life of a PI is, sadly,  not for me.

Lizzie: So you have a full-time job, you are a writer and, a co-conference organiser – how do you balance the three?
Donna: I’m also doing a part-time MLitt at the moment. As you can imagine, my social life isn’t very social.
Sadly, the thing that goes is the writing. Although I have recently written a rather fascinating essay on Mary Wollstonecraft, Simone de Beauvoir, intersectionality and ontological arguments. It has best seller written all over it.

Lizzie: As an author of the humorous mystery, what and/or who do you enjoy reading?
Donna: I love dark and warped humour, I am a big fan of noir and pulp fiction (how can you resist a title like Swing The Big Eyed Rabbit, or Swamp Brat, or The Case of The Radioactive Redhead?). I'm open to anything in the crime fiction genre, as long as it keeps my interest. Some of my favourite authors, in no particular order, are Steve Mosby, Chris Ewan, Denise Mina, Donald Westlake, Declan Burke, Colin Cotterill, Christa Faust, Karen Campbell, James M Cain, Ken Bruen, Allan Guthrie, Vera Caspary, Daniel Woodrell, Joe Lansdale, Megan Abbott, Arnaldur Indridason, Yrsa Sigurdardottir, Hakan Nesser, Ray Banks, Russel McLean, Michael Malone, Cathi Unsworth, Dorothy B Hughes, Helen Fitzgerald, Eddie Muller, Bill Fitzhugh, Steve Brewer... I suppose I'd better stop there, hadn't I? I also read outside the genre and have recently been gobbling up Jean Rhys' books. She's known mostly for Wide Sargasso Sea but she wrote some deliciously dark and depressing novels in the 1930s.

Lizzie: Are you currently working on another book? If so can you tell us a little about it? If not do you have any plans to write further books?
Donna: Well, apart from an essay on the depiction of nineteenth century marriage in the novels and short stories of Kate Chopin and Charlotte Perkins Gilman, I have a screenplay on the go (a gentle Scottish comedy), a finished screenplay (a not so gentle Scottish crime comedy set in a retirement home - I seem to enjoy writing about those of a certain age) which I'm thinking of adapting into a novel (I believe it's supposed to be done the other way round, but...oh, well), and a couple of other ideas percolating.

Thanks for asking me! And if people are thinking about coming to CrimeFest, I would say definitely give it a try. It's really friendly, excellent fun and the panels are always great - nothing to do with my programming, and all to do with having some amazing authors who are invariably entertaining and interesting. I have made some great friends at CrimeFests in the past and, as always, I’m looking forward to making new ones and hugging old ones I only see once a year.

Donna, thank you for taking the time to chat with me, it has been an utter delight.