‘The Cherry Pages’ by Gary Ruffin 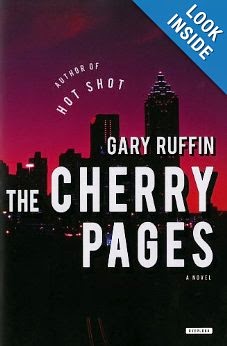 Coop , or Detective Samuel Cooper,  has been asked by a friend to do him a favour.  This requires that he works as a bodyguard for a visiting film celebrity who has received death threats and is visiting Atlanta, the apparent site for her projected demise.  Her name Cherry Page.

People start dying around Cherry and Coop begins to try to follow up the leads to find the deadly stalker.  He is not helped by his ongoing personal relationship which he finds difficult to commit to, but is aware that Cherry Page is one of his girlfriend’s favourite actresses.  This makes it all the more difficult as he starts to find her attractive and this feeling makes his job harder. In addition, it seems that the feeling is not one sided.

This is tightly paced novel with some really interesting dynamics between the main character, his partner, the proposed victim and the villain.  The narrative moves you through the characters and the locations and the thread of the threat is nicely expressed and dark at times, whilst remaining in the background of the story of the relationships and thinking of the individuals including the stalker.

I enjoyed this book, which produces a hard boiled detective with a runny emotional centre at times.   Some of elements are comedic, but within a black story of stalking and celebrity obsession.  A good and entertaining read.
------
Reviewer: Amanda Brown

Gary Ruffin is the author of Hot Shot  the first novel featuring Detective Sam’Coup’ Cooper. A former guitarist and songwriter for the 1970’s rock band, he co-wrote the first American Rock Opera, the Survival of St Joan, which appeared on Broadway. Ruffin now lives and writes in the Atlanta area
Posted by Lizzie at 17:23