‘The Other Woman’ by Jane Adams 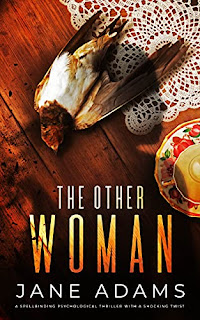 From a baby Marcie was brought up by her grandparents after her mother died and was idolised by her grandfather Jack. His pet name for her was Birdie as she seemed so small and helpless.

We learn that some years ago there was a big falling out within the family and Marcie left. She married Michael and they had twins, a boy and a girl. Marcie has now learned that Jack is seriously ill and decides to visit him in the hospice and perhaps to put aside for a while the bad feeling there had been between them.

He is very disturbed and is really fretting over a woman named Rebekkah. It is revealed that he had an affair with her and she was subsequently murdered by her husband. Reluctantly Marcie with the help of her husband agrees to look into Rebekkah's life and death more closely to try and ease Jack's troubled mind before he dies.

To find out more Marcie has to visit her grandmother and it leads to her being reconciled with her father Alec, who joins her and Michael in the search for what really happened all those years ago. She becomes quite obsessed with Rebekkah and is further disturbed when she sees her ghost, then to make it worse Michael also sees her. Marcie is now convinced that the murdered woman herself wants her to find out what really happened to her.

The truth is slowly revealed, but they are not prepared for the revelations that unfold, especially when they discover the truth about Jack's brother Joe who died many years ago.

Does what Birdie find out about Jack heal the rift after all these years or does it widen it further. Is what she discovers at the end even the real truth after all?

A really creepy thrilling story of family secrets kept hidden for years. It is full of “oh” and “no” moments, especially in the final pages.

Another really absorbing book from Jane Adams which I thoroughly recommend for lovers of ghostly thrillers full of surprises and unexpected endings.
------
Reviewer: Tricia Chappell

Jane Adams was born in Leicestershire, where she still lives. She has a degree in Sociology and has held a variety of jobs including lead vocalist in a folk-rock band. She enjoys pen and ink drawing; martial arts and her ambition is to travel the length of the Silk Road by motorbike. Her first book, The Greenway, was shortlisted for the CWA John Creasey Award in 1995 and for the Author's Club Best First Novel Award. Jane writes several series.  Her first series featured Mike Croft. Several books featuring DS Ray Flowers. Seven titles featuring blind Naoimi Blake, and six titles featuring Rina Martin. In 2016 she started a series set between the two World Wars and featuring Detective Inspector Henry Johnstone and his sergeant, Micky Hitchens.  Bury Me deep is the first book in a new series featuring Detective Inspector Rozlyn Priest.  Jane has also written several standalone novels. She is married with two children. 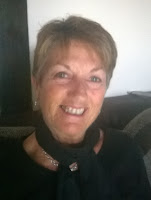 Tricia Chappell. I have a great love of books and reading, especially crime and thrillers. I play the occasional game of golf (when I am not reading). My great love is cruising especially to far flung places, when there are long days at sea for plenty more reading! I am really enjoying reviewing books and have found lots of great new authors.
Posted by Lizzie at 14:07