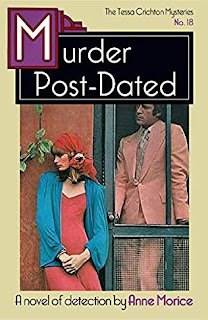 Murder Post-Dated is set in the early 1980s and features young actress Tessa Chrichton who has an instinct for seeking out suspicious deaths. The story starts when Tessa and her husband, Chief Inspector Robin Price of Scotland Yard, are invited by Elsa, a good friend, to attend a lavish party she is holding to celebrate the eighteenth birthday of her daughter, Millie. As well as the formal invitation, Elsa has included a cryptic note that tells Tessa not to worry because the murder has already happened, and it wasn’t a murder anyway. Intrigued, Tessa accepts the invitation, although work commitments mean that Robin cannot accompany her and she ends up seated next to James McGrath, the stand-in that Elsa has arranged. McGrath is a lively if somewhat overwhelming conversationalist, but Tessa prefers his company to the people on her other side, neighbours of Elsa, the grumpy and censorious Tim and Louise Macadam. Elsa claims that Tim Macadam has a heart of gold, but Tessa has seen no evidence of this. Tessa also meets Gregory Laycock, a Harley Street consultant, an arrogant man who is obsessively devoted to his daughter, Andrea, whose mother died when she was a baby. Andrea is an exceptionally beautiful young woman, but she is also shallow, self-centred and a fantasist, with a tenuous grasp on the realities of life, who tells involved and often contradictory stories, including informing people she has only just met that her stepmother is trying to kill her as well as planning to commit suicide.

A few days after the party, Elsa explains to Tessa the reason behind her strange message about a murder that didn’t happen. James McGrath’s wife, Rosamund, has disappeared and McGrath’s stories about her absence have been contradictory. This has aroused the suspicions of neighbours, such as Louise Macadam who makes no secret of her belief that McGrath has murdered his wife. However, Rosamund’s body has not been found, and this means that nobody can prove that she is dead.

Tessa cannot resist probing further, and soon she has more than one murder investigation on her hands, and she has to unravel an intricate tangle of lies, motives and suspects in order to reveal the truth and allow those who are innocent of murder to be absolved.

Murder Post-Dated is the eighteenth book in the series featuring Tessa Crichton and her allies in investigation. It works well as a stand-alone novel, although it takes a few chapters to fully identify the many returning characters and their relationship to Tessa. It was first published in 1970 and has recently been republished with a fascinating introduction and afterword by Curtis Evans, who reports that when the first Tessa Crichton novel was published it received glowing reviews from critics such as Francis Iles (Anthony Berkeley) and Edmund Crispin.

Murder Post-Dated has the delightful ambience of a traditional Golden Age crime story with a later twentieth century setting. It is a cosy crime novel with warm and amusing relationships between Tessa and the somewhat eccentric family and friends who support her investigation but is lifted above the ordinary by Tessa’s sharply witty first-person narration. The plot is cleverly constructed, and the psychological insights are convincing. The characterisation is excellent, and Tessa is a lively and engaging protagonist. This is a series that is well worth reading and I will be accessing more of them, starting at a point much nearer the beginning. Murder Post-Dated is an interesting read, which I thoroughly recommend for anyone who enjoys a traditional mystery.
------
Reviewer:  Carol Westron

Anne Morice, née Felicity Shaw, was born in Kent in 1916. Her mother Muriel Rose was the natural daughter of Rebecca Gould and Charles Morice. Felicity’s older sister Angela became an actress, married actor and theatrical agent Robin Fox, and produced England’s Fox acting dynasty, including her sons Edward and James and grandchildren Laurence, Jack, Emilia and Freddie. Felicity went to work in the office of the GPO Film Unit. There Felicity met and married documentarian Alexander Shaw. They had three children and lived in various countries. Felicity wrote two well-received novels in the 1950’s but did not publish again until successfully launching her Tessa Crichton mystery series in 1970, buying a house in Hambleden, near Henley-on-Thames, on the proceeds. Her last novel was published a year after her death at the age of seventy-three on May 18th, 1989.