‘The King’s Evil’ by Andrew Taylor 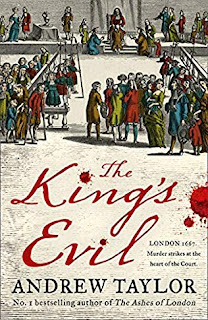 It is 1667 and King Charles II has been on the throne since the Restoration in 1660. The country has lived through the Plague and the Fire of London. But the fissures – religious and political - in society that had led to the Civil War and the Protectorate of Oliver Cromwell still exist and everyone from the King himself to ordinary country folk has to tread very carefully. That includes James Marwood, the protagonist in this and the two preceding novels – Ashes of London and The Fire Court (see the Reviews page in Mystery People).

James now has a minor clerical post in the King’s palace of Whitehall and his master serves one of the King’s close circle of advisers. But James is known to the King so when he gets a message via the ubiquitous Mr Chiffinch (in effect, the King’s ‘go-fer’) that he is to meet with Lady Quincy he goes. Lady Quincy is as seductive and duplicitous as she had been in the earlier novels but when she tells James that he must take a message to her niece Kat Lovett that she is in danger he believes her. Kat has also featured in the previous Marwood novels; as the daughter of a regicide her loyalty is automatically suspect and although she is now living in the house of the elderly architect Master Hakesby and calling herself Jane Hakesby, nonetheless she now has to disappear. The apparent reason is that her cousin, the lecherous Edward Aldersley, has been found dead in a well. But is that the whole truth? Or is there a link to a mysterious silver box? And if so, what has happened to the contents of that box? And how does that connect to the Earl of Clarendon, one of the King’s inner circle of advisers but now likely to fall from grace for all that he was not only the King’s companion during his pre-Restoration but is the father-in-law of the King’s brother Prince James and grandfather of the Princesses Mary and Anne? As Charles has no legitimate children (although plenty of illegitimate ones) the Princesses are, after their father, next in line to the throne and they have to be protected. But Clarendon’s rival, the Duke of Buckingham, would dearly like to undermine the Prince’s position. Can he find a way of doing this? And why should Kat be in such grave danger?

The book opens and close with two separate ceremonies for the Cure of the King’s Evil, also then known as Scrofula, but in fact in most cases a form of tuberculosis, in which the King touches the necks of those afflicted with the disease. Since the reign of Edward, the Confessor this had been supposed to be an attribute of the Divine Right of Kings and plenty of people in the seventeenth century. But does Charles himself? Or, is he, for all his outward self-promotion as The Merrie Monarch, even more clever and devious than those around him? And prepared to use the ceremony of Touching for the King’s Evil to protect himself and his family? And will James and Kat survive the murky maze of conspiracy in which they are entangled?

I have to say that for much of the story I was as confused as Kat and James. But the author is in full control of the narrative which is eventually thoroughly and satisfyingly disentangled. Recommended.
------
Reviewer: Radmila May

Andrew Taylor is a British crime and historical novelist, winner of the Cartier Diamond Dagger (for lifelong excellence in the genre) and the triple winner of the Historical Dagger. His books include the international bestseller, The American Boy (a Richard and Judy selection); The Roth Trilogy (filmed for TV as Fallen Angel); the Lydmouth Series; The Anatomy of Ghosts, shortlisted for the Theakston's Old Peculier Crime Novel of the Year; The Scent of Death and The Times/Waterstones bestseller, The Ashes of London. He lives on the borders of England and Wales. He reviews for the Spectator and The Times.
www.andrew-taylor.co.uk
Follow on twitter: @andrewjrtaylor