‘Fire on the Fens by Joy Ellis 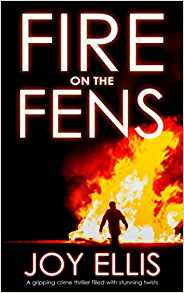 Detective Inspector Nikki Galena is summoned to present her department’s ongoing investigations to her new supervisory officer.  Although the detective has some reservations about working for the reputedly fast-tracked young and ambitious Superintendent Lucien Crawford, she takes heart that her briefing should be easy in the absence of any outstanding major crimes.  When she enters the Superintendent’s office, however, she is surprised to discover Cameron Walker, a colleague with whom she previously worked and for whom she has affection and respect.  It transpires that Crawford is languishing in hospital after a skiing accident and Walker has been appointed Acting-Superintendent in his stead.  Galena’s delight is short-lived, though, when her new boss relates a disturbing phone call he has just received from an old colleague, John Carson.

Carson is a recently retired Fire Investigation Officer and now a fire consultant.  He has been tracking a series of low-level fires that, on their own, appear to be random acts of arson, probably committed by youths looking for kicks.  The experienced fire officer, however, has noticed certain patterns linking the apparently mundane incidents and he has charted the gradual increase in severity of the fires which he now believes are the work of one individual who is “doing an apprenticeship” that is leading up to something much more serious.

It is not long before Carson’s fears are proved right and Galen’s team of detectives are plunged into a race against time to find an arsonist whose motivation proves as elusive as his, or her, identity.  The Greenborough detectives are confronted by an array of suspects. Leon Martin, for example, curate of Saint Saviours, admits to knowing each of the victims when he is questioned by DI Galena, but becomes suspiciously reticent when asked about a cult that is operating in the town – what might he be concealing?  And what of those leading the quasi-religious group?  The New Order Luciferians, as they are known, operate from the disturbingly named Black House – could they be responsible for the rising death toll?  The victims also pose a conundrum for the Fenland sleuths. There is no obvious connection between them, and each is described as being thoroughly likeable, generous and without an enemy in the world.  Every new lead asks more questions than it answers as the arsonist picks off his victims with chilling efficiency and speed.

This well-written and fast-paced novel has just the right number of sub-plots to create those delicious twists and turns that keep the reader guessing.  Nikki Galen is a fascinating and likeable protagonist who had me rooting for her from the outset.  The closely-knit police team around Galen are imbued with character and energy as they strive to find the killer and I found myself completely immersed in the pursuit.  Moments of sadness and humour serve to heighten tension within the narrative as it accelerates towards the dénouement.

Fire on the Fens is the latest in Joy Ellis’s Fen Series.  It works perfectly as a stand-alone novel, but I am now captivated by the Fenland detective and cannot wait to go back to the beginning of Nikki Galen’s cases.  A super read.
------
Reviewer: Dot Marshall-Gent

Joy Ellis grew up in Kent but moved to London when she won an apprenticeship with the prestigious Mayfair flower shop, Constance Spry Ltd. Many years later, having run her own florist shop in Weybridge, Joy took part in a writers’ workshop in Greece and was encouraged by her tutor, Sue Townsend to begin writing seriously. She now lives in the Lincolnshire Fens with her partner Jacqueline and their Springer spaniels, Woody and Alfie.
http://www.joyellis.info/