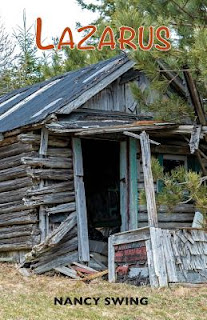 In this story set in the U.S state of West Virginia, the protagonist, 16-year-old Jimmy Lee Schuman, has lost his father in a mining accident. The eldest of five children, the burden of earning enough money to support his mother and younger brothers and sisters falls on him. But he has no qualifications at all and the meagre wages he earns in the local supermarket are not enough for the family’s needs. Then – a stroke of luck. An elderly widow, Mrs Simmons, has acquired a lonely tumbledown cottage and needs someone to help her get it habitable. And when they find a badly injured dog, an Alsatian, near death, they decide to rescue it and call it Lazarus.

All seems to be going well. Until, that is, they – or rather Lazarus – makes enemies of the local roughneck family, the Flint brothers. And when Mrs Simmons’s house is broken into and the contents wrecked, they are the obvious suspects, particularly Junior, the oldest Flint brother. And then Jimmy Lee and Mrs Simmons find Lazarus dead on the porch of the Flint home. They are both devastated and convinced that Junior is the culprit, but the police refuse to prosecute. But worse is to happen – Mrs Simmons’s house is set on fire and she perishes in the flames. And because she has left her property to Jimmy Lee having no family of her own, he becomes a suspect. He has to clear his name and find out who is the real author of his friend’s murder.

The story is told by Jimmy Lee himself with a highly skilful approximation by the author of the way people speak in West Virginia as she tells us in a preface to the book which I myself found deeply convincing. Jimmy Lee himself is a most appealing character who is prepared to dedicate himself to supporting his family. In this he is supported by his ardent Christian faith which he shares with just about everyone in this isolated township. This religiosity is something which many British readers may find difficult to take but we have to accept that attitudes to religion in parts of the U.S. are very different to what they are in the U.K. From that aspect this is a very illuminating depiction of life and attitudes in a country with which in some respects we have so much in common and in others so little.
------
Reviewer: Radmila May

Nancy Swing wins five-star reviews for mysteries with twisty plots, unconventional characters and engaging settings. Each book is the fruit of her unusual life journey, stretching from the hills of West Virginia, thought the deserts of Somalia and the jungles of Laos to the olive groves of Italy. Now retired from international consulting, she's turned her hand to writing and lives with her husband, nonfiction author Russell Sunshine, on California's Central Coast.