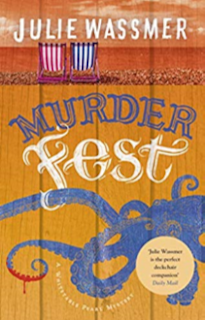 Pearl Nolan, owner of the restaurant The Whitstable Pearl, is persuaded to take part in A Local Arts Festival being held to honour a cultural exchange visit from Borken, Whitstable’s Twin Town in Germany.  Heather Fox, whose father Colin has been chairman of the twinning association for almost 20 years, has undertaken the organisation of ’Whit Fest’. Following Colin’s last heart attack, he has been unable to make trips to visit with his friends in Borken, so, Heather has arranged for his old friend Wibke Ruppert and her brother Laurent to make the trip to Whitstable as Borken Ambassadors.

With the decision to hold the welcoming event at her restaurant, Pearl sets about drumming up sponsorship, happily able to do so having installed a new young chef at The Whitstable Pearl.  Admittedly the reason for that had been to spend more time at her new venture, her detective agency, but, mused Pearl, that would have to take a back seat until after Whit Fest.

Pearl’s mother Dolly is impressed when she sees that the celebrated author Blake Cain is taking part in The Three Writers event, but somewhat dismayed when she learns that he has been matched in the event with his ex-wife Cathy McTurk. She lets out a further gasp when she sees that also taking part is Vesta Korbyn, The Queen of Gothic Noir, who has also had a dalliance with Blake Cain.  Not surprisingly old grudges quickly surface and tempers flare, and the result is murder, and a very nasty one at that.

Much to Pearl’s delight, DCI Mike McGuire, who had been assigned to a high-profile robbery case, has returned to investigate the murder along with his new detective Sergeant Terry Bosley – not so delightful!  Pearl and Mike are in a relationship that is still undefined for what of, a better term. Each time they get close to each other something seems to intervene, often Pearl’s sleuthing.

As the investigation proceeds, secrets are revealed. Secrets that someone will stop at nothing to keep hidden, not even another murder.

I have read and enjoyed all the earlier books in this series. The characters leap off the page, and the descriptions of Whitstable made me want to drive there immediately. Highly recommended.
------
Reviewer: Lizzie Sirett