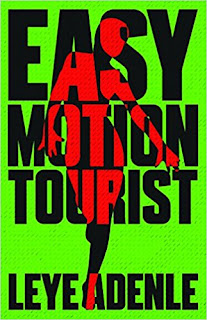 Journalist Guy Collins has been sent to cover the imminent Nigerian elections, not by the BBC as he leads people to understand, but by a start-up internet TV news channel. On his first evening, he ventures out into a bar, thronged with prostitutes, and while he and they are chatting there is a disturbance outside: a girl’s mutilated body is lying in the gutter. Guy is among those taken in for questioning, his mobile is seized, and he is taken to the police station for questioning. While there he witnesses a man being beaten up to within an inch of his life. At that point a young woman intervenes. She is Amaka, a lawyer who works for a charity called Street Samaritans which takes in young working girls, provides decent accommodation, pays for free medical care, and enables the girls, while still working the streets, to prepare for a life beyond the prostitution to which they have been driven by poverty, a life in which they are frequently ill-treated and even murdered. Amaka, unofficially, also does her best to protect the girls by keeping tabs noting which clients are capable of violence and worse. That is what leads Amaka to rescue Guy from the alarming Inspector Ibrahim and his Fire-for-Fire squad of detectives. She believes that the worst cases of violence and abuse involve the murderous trade in body parts for witchcraft and ritual. Believing that Guy is a BBC reporter she wants him to give full coverage of what is going on and how many of Nigeria’s elite are involved.

Guy is torn: on the one hand he would like nothing more than to return to his flat in Fulham; on the other hand, the story is a big one and could considerably enhance his chances of establishing himself as a serious journalist. And he finds Amaka attractive . . . very attractive. So he stays and is drawn into a world of corruption and violence, at one level involving low-life gangs with members rejoicing in such street names as Knock-Out, Go-Slow, and Catch Fire (not to mention a police officer known as Hot-Temper), at another level some of the richest and most powerful men in Nigeria (all men, be it noted). Guy and Amaka’s own lives are at risk in the nail-biting final episode.
Recommended.
------
Reviewer: Radmila May

Leye Adenle, winner of the first ever Prix Marianne in 2016, is a Nigerian writer living and working in London as an agile coach - sort of a trainer of computer geeks.  He has written a number of short stories under his own name, and over a hundred satirical pieces under various other appropriated names. His short story, The Assassination, in the anthology, Sunshine Noir, was a finalist for the 2017 CWA short story dagger award. His writing has appeared in publications such as the Big Issue, and he has written and recorded pieces for BBC Radio 4 and BBC World Service. He very much enjoyed doing that.