‘Death of an Honest Man’ by M.C. Beaton 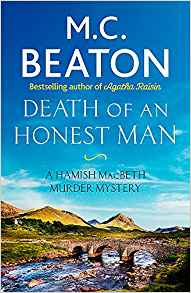 Death of an Honest Man is the 34th title in this author’s immensely popular series featuring the likeable Sergeant Hamish MacBeth and set in the far north-west of the Scottish Highlands in the county of Sutherland. Some of the earlier title were serialised on TV with the actor Robert Carlyle as Hamish. Hamish is based in the village of Lochdubh but his beat takes him all over Sutherland, and he likes to get to know as many of the county’s inhabitants as he can, including incomers. The latest of these is the retired bank manager Paul English (actually, despite his name, from the Scottish Lowlands) in the village of Cnothan. So, Hamish, with the amiable but clumsy Constable Charlie Carter, sets off for Cnothan, but with reluctance for the village has a reputation for sourness. And when Hamish and Charlie get to the village they find that English is sourer than the rest of the inhabitants put together. He never misses an opportunity to denigrate all and sundry to their faces and behind their backs and cares little how much anger and resentment he is stirring up against him. Eventually his vituperative nature proves his undoing; he first disappears and then is found dead in a bog.

In this lively and endearing tale there are plenty of suspects from within Cnothan itself and further afield to keep the plot going at a rollicking pace. A complicating factor is that Charlie, feeling that his lot as a policeman is not a happy one, finds true love and a fulfilling lifestyle as a crofter on the Hebridean island of Barra. Another complication is the continuing persecution of Hamish by his superior Inspector Blair, always obsessive but now edging into derangement.

Meanwhile Hamish is missing his beloved wildcat Sonsie, his dogs Lugs and Sally being no substitute. And above all he is saddened by his lack of love life, all his previous attachments having come to nothing or being unsatisfactory.

All this adds up to a highly entertaining brew of gentle mystery leavened with wry comedy. A look through the on-line reviews of her previous novels will establish just how popular this author is with readers of ‘cosy crime’, a genre which may not attract the media coverage that the harder-edged variety does, but is in practice at least as popular with readers.
Recommended especially for fans of cosy crime.
------
Reviewer: Radmila May