‘The Mother’ by Jaime Raven 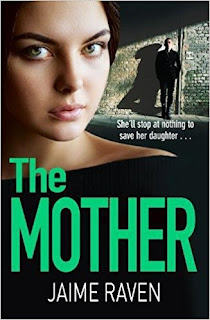 This very commercial thriller kept me engrossed: it is an absolute page-turner. I picked it up every available minute in mid-December and Christmas preparations suffered as a result.

The protagonist is Sarah Mason, a divorced female detective. Her little girl Molly is abducted and Sarah receives a series of scary messages from the kidnapper saying she’s been taken to punish Sarah, and won’t ever be given back. Instead Sarah will be sent photos of her daughter settling into a new life and forgetting that Sarah was ever her mummy. Meanwhile, if Sarah should do anything the kidnapper doesn’t want her to do, like releasing the photos to the media, as inadvertently happens, her little girl will suffer the consequences. It is a very frightening premise and it’s not surprising that Sarah, unaware of any such vicious enemy, falls to pieces.

Sarah’s ex-husband Adam meanwhile, also a detective, is devastated too, but channels his fear into action. Ignoring orders from the police team investigating, he acts on his own suspicions and begins to make progress, handing the police useful leads through some ballsy confrontations. I won’t say more for fear of spoilers, but the novel is well plotted and hangs together beautifully, with a particularly nice twist relating to the reason for the abduction. The solution to who had taken Molly, and why, is convincing and while I was a little ahead of Sarah and Adam in reaching the answer, it added to the enjoyment – I suspect that was the author’s plan. Nothing more satisfying than thinking: I was right. And the climax was as heart-stopping as you could wish for.

The Mother is going to please mightily. And it was certainly un-putdownable; thank goodness I finished it before Christmas Eve!
------
Reviewer: Dea Parkin