Today Radmila May reviews the first two mysteries in the Rosie Strange series. 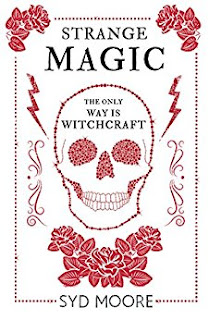 Rosie Strange is a proud Essex girl (with hair to match), down-to-earth, not standing for any nonsense, particularly of the paranormal variety. So, when she learns that her grandfather Septimus has left her a museum – the Essex Witch Museum – which he founded years ago her first thought is to sell it. But before doing so she decides to leave her London flat and go down to have a look at the museum in the appropriately named village of Adder’s Fork, not far from Chelmsford. When she gets there, she finds that the museum building is pretty ramshackle and some of the exhibits are showing their age. She also meets the museum’s curator, Sam Stone, a Ph.D. student-cum-curator/manager/outreach worker who is trying to instruct a class of teenagers from Hell in the history of witchcraft in England particularly in Essex which had been the centre of witch persecution in the 16th and 17th centuries. Rosie, whose day job is as Benefits Fraud Inspector, manages to subdue the teenagers with threats to cut off their parents’ benefits if they don’t behave which is more than Sam or their teacher could do. Sam himself is a rather more awkward customer; Rosie may be the owner of the museum, but he feels he should be in charge. The relationship between them is somewhat prickly and Rosie feels that she has to make it clear that she is the owner and as such is the one in charge even if Sam is pretty fanciable. So, when a Dr George Chin from the nearby Fortenbras University appears with a request that they find the remains of one Ursula Cadence who was executed in 1582 for witchcraft and that there will be a sizeable reward which could be used to renovate the museum (and enhance its marketability – not that Rosie has informed Sam of this) she agrees. But Sam, who is like Rosie sceptical but for more scholarly reasons, is doubtful about the feasibility of this: the remains of most witches were left to rot. However, it appears that Ursula’s remains were found recently and as a result a young boy, Max, has been possessed by the spirit of Ursula’s own son who had unwittingly betrayed her. Whatever the truth of the possession Max is now near death and his parents are desperate. So, Rosie and Sam, bickering all the way in true romcom style, set off to find the bones; their quest takes them across England to Boscastle in Cornwall and back again, first, to the suitably-named Hades Hall and then to an ancient church, and into considerable danger not only to themselves but to Rosie’s beautiful new cowboy boots. Will Rosie ever find out whether Sam fancies her like she fancies him? And there’s also the suave, older man, Monty, from some mysterious secret service department, a bit too posh for Rosie’s tastes but not bad all the same, who appears part of the way through the narrative – what about him?

And then there’s an announcement from Rosie’s Auntie Babs: she’s made an appointment for Rosie and Sam to meet one Ray Boundersby to carry out another investigation. This time it’s not witches, it’s ghosts. And Boundersby isn’t the sort of person to say No to . . . if you know what I mean . . . which segues very neatly into the next Essex Witch Museum Mystery . . .
------
Reviewer: Radmila May 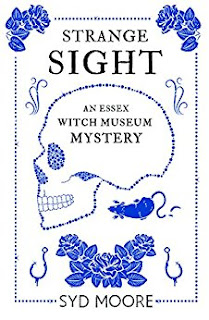 This time Rosie and Sam are in London, in Fleur-de-Lys Court, off Fetter Lane which runs between Holborn Circus and Fleet Street and now it’s Rosie’s beautiful new golden boots which are at risk. A hundred years ago the Court had been the haunt of thieves and prostitutes; now it is where the upmarket restaurant La Fleur, owned by the afore-mentioned Ray Boundersby and thronged with foodies, is situated. Except that something strange is going on: ghosts have been seen, rats are infesting the exquisitely designed dining-room, and patrons have been smitten with food poisoning. Worse is to come: late one night, restaurant manager Mary, Boundersby’s daughter, discovers in the basement the body of Seth, the mercurial chef, hanging from a hook in the ceiling. And Mary, as the only person in the restaurant at the time, is a ‘person of interest’ to the police. Boundersby offers Rosie and Sam a lot of money to sort matters out and clear his daughter from suspicion, independently of the police. And if they can’t sort matters out, so much the worse for them . . . if you understand me . . .

So, what is going on? Is there a rational explanation? And why has Monty reappeared? Will Sam give some indication of how he feels about Rosie? And is the also-fanciable Detective Sergeant Jason Edwards going to feature?

Both these books offer splendidly light-hearted stories, enjoyable and amusing. Yet at the same time there is a much more serious element to them. In the first it is persecution of so-called witches, both historical and present-day. In the second, it is violence towards women, again both historical and present-day. And considerable research is evident: for instance, there really was a Fleur-de-Lys Court although it disappeared many years ago. News to me although I worked off Fetter Lane for over ten years. And a splendid new word: pareidolia which means the condition in which one sees human faces in things like cloud formations or rocks.
Recommended.
------
Reviewer: Radmila May

Syd Moore lives in Essex, where the Rosie Strange novels are set. Before embarking on a career in education, Syd worked extensively in the publishing industry, fronting Channel 4’s book programme, Pulp. She was the founding editor of Level 4, an arts and culture magazine, and is co-creator of Super Strumps, the game that reclaims female stereotypes. Syd has also been a go go dancer, backing singer, subbuteo maker, children’s entertainer and performance poet, She now works for Metal Culture, an arts organisation, promoting arts and cultural events and developing literature programmes. Syd is an out and proud Essex Girl and is lucky enough to live in that county where she spends her free time excavating old myths and listening out for things that go bump in the night.