‘Force of Nature’ by Jane Harper 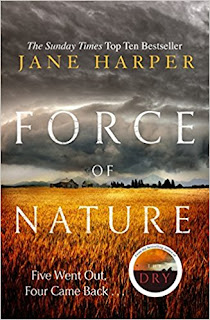 I was knocked out by Jane Harper’s first book The Dry, and so it was with great excitement that I opened the pages of Force of Nature and I was not disappointed.

The story opens with the male half of a corporate teambuilding exercise gratefully returning to civilisation, retrieving their mobile phones and getting back in contact with the outside world.  Initially, pleased to be first back, they smugly await the return of the female team. But as the hour of the rendezvous passes, smugness turns into irritation.  When the women finally limp into camp they are one short. Alice is missing!

As the search swings into action, the narrative switches between the story of the five ill-matched women taken out of their comfort zone and left to survive in the rugged terrain of the Giralang Rangers outside Melbourne.  Petty squabbles and disagreements between the five quickly surface.   Jill Bailey, owing to her position in the company of Bailey Tennants, assumes the position of leader of the group, but she is constantly challenged by Alice.  One of the team members Lauren has known Alice since schooldays. They have a dark history. Also within the group are two sisters, and all five have secrets.

Hearing of the news of the missing woman is Federal Police Agent Aaron Falk, with whom Alice had been in contact. She was expected to deliver to him documents that were evidence of malpractice at Bailey Tennants.

Into the mix is the fact that a serial Killer, Martin Kovac, still haunts that particular area.

The characters are sharply drawn, and the tensions between the group are stretched to breaking point, then they begin to turn on each other. But did they resort to murder?

Brilliantly plotted, this is an absorbing and thrilling page-turner.   Most highly recommended.
-----
Reviewer: Lizzie Sirett

Jane Harper was born in Manchester in the UK, and moved to Australia with her family at age eight. She spent six years in Boronia, Victoria, and during that time gained Australian citizenship. Returning to the UK with her family as a teenager, she lived in Hampshire before studying English and History at the University of Kent in Canterbury. On graduating, she completed a journalism entry qualification and got her first reporting job as a trainee on the Darlington & Stockton Times in County Durham. Jane worked for several years as a senior news journalist for the Hull Daily Mail, before moving back to Australia in 2008. She worked first on the Geelong Advertiser, and in 2011 took up a role with the Herald Sun in Melbourne. In 2014, Jane submitted a short story which was one of 12 chosen for the Big Issue's annual Fiction Edition. That inspired her to pursue creative writing more seriously, and that year she applied for the Curtis Brown Creative online 12-week novel writing course. She was accepted with a submission for the book that would become The Dry and wrote the first full draft during the three-month course. Jane lives in St Kilda with her husband and daughter.