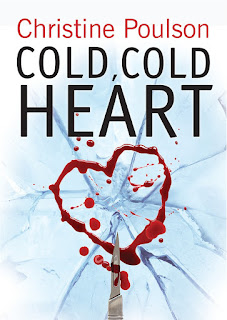 Katie Flanigan was working as a researcher into blood disorders when she first met Patents lawyer Daniel, his wife Rachel and their daughter Chloe who suffers from Diamond-Blackfan anemia, a rare and serious condition.  Unfortunately, the funding for her research has dried up following her decision to expose a case of scientific malpractice. And although she knows that she did the right thing it appears ‘no one likes a whistle blower’. She has now taken a position with the British Antarctic Survey, and is due to fly out to Rothera.  But an accident at the Edward Wilson base, the most remote of the three British Antarctic research stations, creates the need for an urgent replacement.  And so, Katie finds herself on the last flight to Antarctica before the weather closes in and no one will be able to get in or out for several months.

In an email to Rachel, Katie describes the nine companions she will be incarcerated with for the next few months.  She doesn’t know that one of them is a killer.

Meanwhile, we are privy to the problems manifesting themselves back in the UK. The researcher into a new cancer treatment has gone missing at an important time and Daniel - who is the lawyer working on the patents for the investor - contacts Sara the only other female at the Edward Wilson base, and the person who had worked with Flora, the missing researcher. As they are talking the line goes dead.

As the weather closes in and they lock down the station a body is discovered. The killer can only be one of them.

This was an intensely gripping and atmospheric book.  Despite being curled up by a log fire, warm and cosy, Christine Poulson had me out there in the Antarctic, cold, shivering, frightened – nowhere to run.  The descriptions of what it is actually like out there were to me utterly scary.

I have read all of Christine’s books and to me she is a master of storytelling and seriously underrated.  If you enjoy a stonking good story that keeps you on the edge of your seat this is for you.  Unmissable.
------
Reviewer: Lizzie Sirett

Christine Poulson writes, I was a respectable academic, lecturing in art history at a Cambridge college before I turned to crime. My first three novels featured literary historian and accidental sleuth, Cassandra James. Something that I didn’t expect when I started writing crime fiction was that other crime writers would be such good fun and so convivial. I’ve made some excellent friends and Martin Edwards is one of them. He knows a huge amount about Golden Age crime fiction – an interest we share.

After the events of Deep Water, scientist Katie Flanagan has gained an undeserved reputation as a trouble-maker. Her
career in research has foundered.
When an accident creates an opening at an Antarctic station she seizes it, flying in on the last plane before winter and the months of darkness close off all escape routes.
However, a killer is at large, seeking revenge for a scientific fraud.
Meanwhile patent lawyer Daniel Marchmont has been asked by a venture capitalist to undertake background research into a company involved in Antarctic research. His investigations threaten to uncover the fraud and expose powerful
individuals.
Katie faces real danger. Then the power at the research
station fails - and only the killer has the skills to save them …