‘Another Man’s Face’ by Andrew Puckett 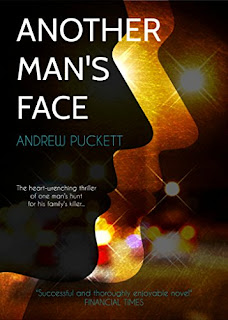 Robert Aspinall is in hospital awakening from an unconscious state, unaware of who or where he is until a voice calls him by his name and says that he is his younger brother Simon. But Rob, heavily sedated, floats in and out of consciousness, although we know that he has been seriously injured in a car crash and that his face has been dreadfully badly burned. Worse than that, Rob’s wife Cordelia and his young son Jake, were killed in the same crash. Rob’s memory gradually comes back, beginning with his and Simon’s strong relationship with each other as children, then his medical studies as a young man and his realisation that, contrary to his father’s wishes, the practice of medicine as a surgeon was not for him. However, he hadn’t abandoned medicine altogether; instead he had volunteered for a French-run medical charity in Africa, and while there had fallen in love with the strong-minded and independent nurse Cordelia, had followed her back to England; they had married and had a child and Rob had gone into hospital administration eventually becoming the Chief Executive of Avon Hospital in the West of England.

Simon, however, has followed his family’s tradition and is a consultant endocrinologist, also at Avon Hospital. It is Simon who receives a visit from Detective Sergeant Louise Whitaker of the Avon Police; she tells him that it appears that Rob’s car was tampered with in such a way as to cause it to crash. She asks him who at the hospital might have wanted to harm Rob; although Rob was looking into the possibility of making savings at Avon Hospital to rescue it from the financial black hole into which it had fallen and this could result in cuts to many, perhaps all, of the hospital’s departments, is that enough to provide a motive for murder? Or had he uncovered evidence of malpractice within or beyond the hospital? Or could there be some other motive closer to Rob’s family? Rob’s distress on learning that his wife and son are dead is agonising, exacerbated by his awareness of how badly his face has been burned although he is told that the new technique of facial transplant could be a solution. With Rob out of action, Simon sets out to established the truth behind the car crash but this leads him and his wife into the utmost peril, and Rob too when he is recovered and finds that it is down to him and Sergeant Whitaker who is as determined as Rob to see that justice is finally achieved.

There is a sufficient number of crime stories with a medical setting to justify the establishment of a sub-genre of Medical Noir with authors in this country such as Priscilla Masters as well as in the U.S. This author would feature strongly in the sub-genre. His deep knowledge and long experience of the NHS give this gripping story great authenticity. We are there with the surgeons who perform the facial transplant on Rob and with the discussions of the various medical personnel about their medical work and the administration of the hospital. Recommended.
------
Reviewer: Radmila May 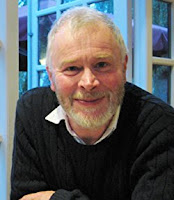 Andrew Puckett is a writer who feels he should experience for himself the trials imposed on his protagonists.  Examples are: Being locked in a freezer room at -40 degrees, climbing a 1000-foot cliff from a rocky beach in the dark, Then encountering the Exmoor Beast (involuntary), Escaping from a prison ship (not actually incarcerated!), Falling into the sea from Durdle Dor (not quite), Escaping from a burning caravan etc.  Before that, he grew up on his parents' farms, the first in a remote part of Dorset, the second in the shadow of Salisbury cathedral. He worked in a brewery, a chemical factory and Porton Germ Warfare Establishment, where he acquired a painful immunity to Plague, Anthrax and Smallpox (which did at least give him the idea for his novel Going Viral). He then worked in hospital labs in Taunton, London and finally Oxford, where he ran the microbiology department at Oxford Blood Transfusion Centre for fifteen years.  His first novel, Bloodstains, was derived from his experiences in the Blood Transfusion Service. He has subsequently published ten more, mostly on a medical theme. He now lives in Taunton with his wife and daughters.