‘Asking For it’ by Geraldine Evans 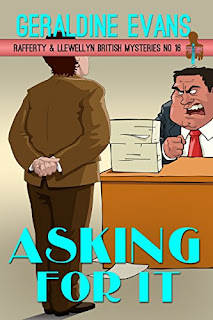 When schoolteacher Laura Scott is found murdered and half naked Detective Joe Rafferty is relieved to be pulled away from the chore assigned to him by his Ma – sort out your two brothers Patrick Sean and Mickey who are at war with each other owing to some ‘stuff’ having gone missing from their lock-up. Each is accusing the other. Unable to get to the bottom of the problem Rafferty gets them to agree to meet up later.

When Rafferty arrives at the crime scene in a field he is cold, tired and disgruntled, the sight of his Sergeant Llewellyn warmly attired yet still retaining the elegance of someone who has just stepped out from the pages of a fashion magazine does little to improve his mood.  His mood slides further downhill when his Ma rings to check on the progress with his brothers.  Hearing that he has agreed to meet them later in a pub does not impress her. He assures her he will make sure they don’t drink too much and start punching each other.

Further misery awaits him when on returning to the station he learns that Superintendent Bradley ‘requests’ his immediate presence. So far he has managed to keep his family’s little skirmishes with the law under wraps but…

‘Porn’s flooding the market’, Bradley informed him, and the Chief Constable’s granddaughter stars in one of them.  Locating the DVDs and destroying them takes priority over everything, Bradley informs him.  ‘Even the murder? asks Rafferty, and enjoys watching Bradley - always conscious of his image - struggling not to say yes.  This is between you and me, says Bradley, it must go no further.  Rafferty stops himself from mentioning YouTube.

Concentrating on the murder Rafferty visits Elmhurst Comprehensive to learn more about Laura Scott. As Rafferty talks to her colleagues and students it seems Laura Scott was all things to all people.

If all this wasn’t stressful enough Abra, his wife is pregnant and Rafferty seems to find it necessary to telephone her every thirty minutes or so.

Whilst the investigation into the murder seems to get more complicated with each new fact they come across, much of the enjoyment of the story is, as in previous books, the relationship between Rafferty and his sergeant, the fastidious Welshman Dafyd Llewellyn, a staunch Methodist who also happens to be Abra’s cousin.  Rafferty has been wondering why Llewellyn doesn’t seem to be making any moves to study for his Inspector’s exam.  He would have supposed that Llewellyn’s wife the ambitious Maureen, would have been keen for him to get ahead. Dafyd remarks that he is considering studying Greek history, but Maureen wants them both to attend a course on Classical Mythology.  Rafferty nods sagely and ponders on the need to understand the real Laura Scott in order to unmask her killer. 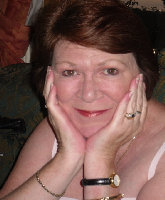 Geraldine Evans is a British writer of police procedurals that contain a lot of humour and family drama.  Her15-strong Rafferty & Llewellyn series features DI Joe Rafferty, a London-Irish, working-class, lapsed Catholic, who comes from a family who think - if he must be a policeman - he might at least have the decency to be a bent one. Her 2-strong Casey & Catt series features DCI 'Will' Casey, a serious-minded, responsible policeman, whose 'the Sixties never died', irresponsible, drug-taking, hippie parents, pose particular problems of the embarrassing kind.
http://geraldineevansbooks.com/