‘The Feast of Artemis’ by Anne Zouroudi 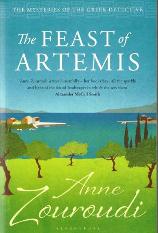 Published by Constable Crime,
2013.
ISBN: 978-1-4088-3753-5
Hermes Diaktoros arrives in the town of Dendra for the festival to celebrate the end of the olive season.  Intent only on an indulgence of fine food and wine, he learns that the feuding between two of the local families has reached epic proportions, with an act of sabotage that results in the badly burning of a young man of one family, and the death of the patriarch of another.

Hermes method of investigation; is a source of pleasure for the reader as he interviews the parties concerned ion his good-mannered way, leaving behind him only goodwill but always achieving his goal.

The story is an intriguing one. What looks straightforward on the surface hides a complex, devious and quite evil plot.

In this investigation we meet up with Dino, Hermes’ brother – an entertaining character who seems to think that the pleasure of his company is sufficient payment for the copious amounts of wine he consumes.

As in previous books the reader is uncertain from whence Hermes comes. When asked - as he frequently is -  if he is from the police, his answer is that he represents a higher authority, and episodes in the lives of those who do not heed him or help him in his investigations do seem to take unexplained turns for the worse.

A marvellous character, solving an intriguing mystery. This book is most highly recommended.
------
Reviewer: Lizzie Hayes.
Earlier books in the series are: The Messenger of Athens, The Taint of Midas, The Doctor of  Thassaly, The Lady of Sorrows, The Whispers of Nemesis, and The Bull of Mithros. 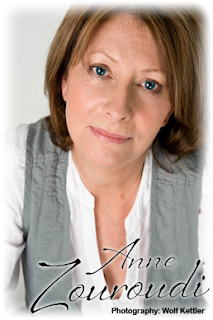 Anne Zouroudi  was born in rural  Lincolnshire, but raised in South Yorkshire.  She was educated at Sheffield High School for Girls.  She then went into the IT industry, a career which took her to both New York’s Wall Street and Denver, Colorado. In America she began to take seriously her ambition to write fiction, and bought a typewriter for her first short stories.  On returning to the UK, she booked a summer holiday with her sister. The location they chose was a tiny island in southern Greece.  Anne spent a number of years living in the islands; she married a Greek, and her son was born there. Anne currently lives with her son in Derbyshire’s beautiful Peak District, where she’s working on the next book in the Greek Detective series.