‘Shadows in the Night’ by Jane Finnis 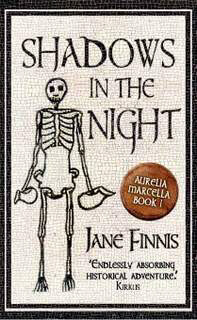 Rome runs England in 91AD, but some of the locals are not happy.  So much so that bodies keep turning up, dead, carrying a message "ALL ROMANS WILL BE KILLED GET OUT OR DIE"

Originally released as "Get Out or Die" this is the UK edition of Jane Finnis' first Aurelia Marcella mystery.  A tightly plotted narrative supports this exciting novel of murder, intrigue, Romans, ancient Britons, sacrificial rituals and wine!

Aurelia runs the local tavern at a crossroads near what is now York.  She works with the local council in running the town and her inn provides refreshments and accommodation for locals and visiting Roman soldiers.  She finds a badly beaten up soldier on her premises and her discovery uncovers a plot to rid Briton of Roman influence, through violence.  Decapitated bodies start to tun up, all carrying a disc with the same words "ALL ROMANS WILL BE KILLED GET OUT OR DIE".  It soon becomes apparent this includes Aurelia and her staff.
This is a well written and cleverly crafted mystery, with well rounded characterisation of both the people and the history of Britain as a part of the Roman Empire.  Jane Finnis controls the flow of the story and subtly intersperses fact and fiction.  Her historical knowledge is clearly evident from her writing, but it is not overdone in any way and supports the wonderfully intricate storyline. Definately recommended reading especially for anyone who, like me, is intrigued by the Romans and that time in history.
------
Reviewer: Amanda Brown 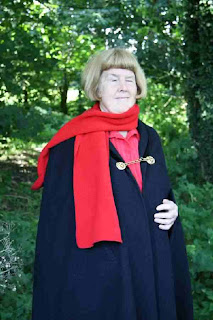 Jane Finnis, read history at the University of London before working as a radio producer for the BBC. She now lives in  east Yorkshire and sp[ends her time researching and writing about the Roman Empire.

www.jannefinnis.com
Posted by Lizzie at 21:06