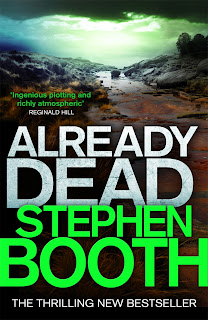 Detective Sergeant Diane Fry is back in Derbyshire E Division headquarters, and she is not happy about it.  Ben Cooper is on extended sick leave following the burns he received when he tried to save his fiancé Liz, who was working as a scene of crimes officer during an arson attack. (See Dead and Buried).

The body of a man has been found in shallow water – did he drown?  Attending the post-mortem Diane finds the pathologist Mrs van Doon less than helpful or disinclined to assist Diane.  With little to go on Diane and her team investigates the solitary life of Glenn Turner, an insurance investigator with few friends. Could his death be revenge for someone who didn’t receive the insurance payment they expected.

This is the thirteenth book in the series and I well remember the excitement I felt when I read the first, Black Dog. Although,  I have enjoyed all the books in the series, this is the one that engendered in me the same excitement.  Why?  Well the mystery surrounding the death of Glenn Turner is as convoluted, complex and engrossing as the previous mysteries have been.  But in this one the characters who have developed over the last twelve books are now sorely tested.  Ben Cooper is pushed to the limit and behaves in a way that seems out of character. But how do any of us know how we will behave in abnormal situations.  I liked Cooper more in this book than in any of the earlier ones.  And began to like Diane, who I confess has always annoyed me, as I dislike her lack of empathy and never understand why she doesn’t learn that a kind word will achieve more than a snappy attitude.  This time, I felt some sympathy as she is struggling and doesn’t know why.

The mystery kept me guessing, and was satisfyingly tied up, but the real surprising twist comes at the end. I will be first in line for the next book.  Highly recommended.
------
Reviewer: Lizzie Hayes
Earlier books in the series are:  Black Dog, Dancing With Virgins, Blood on the Tongue, Blind to the Bones, One Last Breath, The Dead Place, Scared to Live, Dying to Sin, The Kill Call, Lost River, The devil’s Edge, Dead and Buried.