‘Thorn in my Side’ by Sheila Quigley 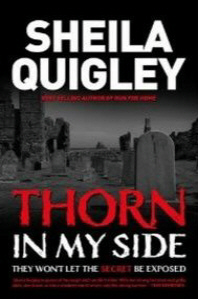 From the prologue we are aware of intense evil.

But the story opens with DI Mike York who has been in London on an undercover operation for three months, and is now going home to the Northumbria.  His only regret in leaving London is the young lad that he has been befriending since he found him in the street almost dead. He discovers that the young lad had been abused from an early age and because of his injuries has earned the name Smiler

While the main voice in the story is that of Mike York, quite early on in the book we hear from a young unnamed woman who is escaping with knowledge that she needs to impart, but knows of no one she can trust.

The killing by flogging is a horrific way to die, and the body of a young girl whipped to death is unbelievable. The description by the pathologist of the make-up of the whip that has inflected these injuries is horrendous.

Set on Holy island, the disappearance of children and the circulation of a new street drug leads Mile York into grave danger.  For these are powerful people who are determined to keep a secret that has been kept hidden for centuries and is worldwide.

Sheila Quigley weaves an incredible tale that spans the centuries but could be so easily part of the world in which we live, although a chilling thought.  On the credit side we have Mike and his elderly Aunt May.

This is the first book in a new series and whilst we may resolve one battle, the war is far from won.  This is also the first book that I have read by Sheila Quigley and this is a situation I will be addressing – what a book, what a writer!
-----
Lizzie Hayes

Sheila Quigley started work at 15 as a presser in Hepworths, a tailoring factory. She married at 18 and had three daughters: Dawn, Janine and Diane and a younger son, Michael. Recently divorced, she now has eight grandchildren, five boys and three girls, and every Saturday and Sunday can be found at a football match for the under tens and under fifteens. Sheila has lived on the Homelands Estate (at present with her son and two dogs) at Houghton-le-Spring near Sunderland for 30 years.
For more information on Sheila visit her website www.theseahills.co.uk