‘A Pound of Flesh’ by Alex Gray 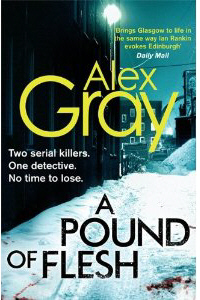 Detective Chief Inspector William Lorimer’sis investigating the killing of prostitutes, in the area.  But someone else is also investigating these killing but by a different method, that of being picked up as a prostitute and then killing the client.

The murder of a prominent politician puts the police under intense pressure, as the media demand answers.  As the police  investigate, the number of suspects increases, it seems our rising politician had a busy life.

Dr Rosie Ferguson, the forensic pathologist has now given birth to their first child, and budget restrictions have been relaxed sufficiently for Bill Lorimer to call on Rosie Ferguson’s husband criminal psychologist Solomon Brightman to help profile not one but possibly two serial killers, one killing prostitutes and one killing their clients. To further complicate the investigation someone is passing information to the media.

This is a complex story, of someone set on revenge, killing men who use young women for sex, in the hope of finding a killer.  That they may not be killing a killer - just a guy looking to pay for a few moments of pleasure from a willing participant is in itself a tragedy. Both a thought provoking story that raises many questions, and an interesting mystery, as Bill Lorimer seeks to find two killers.

Well plotted with a stunning climax, this book is highly recommended.
----
Lizzie Hayes

Alex Gray,  is a Scottish crime writer, born and educated in . She has published six novels, all set around and featuring the character of Detective Chief Inspector Lorimer and his psychological profiler Solomon Brightman. The earlier novels being published by Canongate, and later books by Little Brown. She has also written several magazine articles.