‘The Primrose Pursuit’ by Suzette Hill 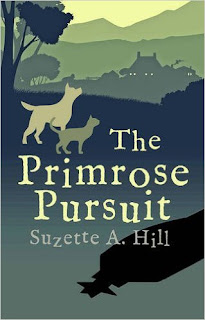 When the reverend Francis Oughterard When the Reverend Francis Oughterard lost his life falling from the church tower attempting to recue one of his parishioners who had somehow impaled herself on a gargoyle, he left behind not only a bereaved sister but eccentric Maurice the cat, who had attached himself to FO when that most gentle of men had offed Maurice’s mistress well a cat needs somewhere to live and it seemed only fair.  And the exuberant Bouncer the dog who had joined the household when his owner disappeared with money that was not his own.

Primrose Oughterard  is a woman who knows her duty  and responsibilities, and so it is that Maurice and Bouncer find themselves adopted by FO’s sister Primrose, and living in East Sussex.  Where FO used to play the piano and suck humbugs, PO paints and drinks gin.  All seems well, except that Primrose has taken against the new Latin master at Erasmus House where Primrose teaches art.  Mr Topping, he that teaches Latin, is as Primrose puts it ‘pure fake.’ Primrose determines to keep an eye on him.

Returning across the downs from a bridge evening Primrose finds a dead body in a deserted area by a pond. Not wishing to be involved, but fearing possible repercussions, Primrose turns to an old friend of her late brother’s whose questionable lifestyle wrought havoc for him. I could have told her that it was not a good idea.

With multiple narrators that of Maurice, Bouncer and Primrose, not forgetting the correspondence between Emily, the school secretary and her friend Agnes enjoying life in Tobago, this tale of  village life set in the late 1950’s is a delight.

Witty, clever, and cunningly plotted, it is a joy to read. Highly recommended.
------
Reviewer: Lizzie Hayes

Suzette A. Hill was born in Eastbourne, Sussex, in 1941; but has lived in many locations - the Midlands, Nottingham, Newcastle-upon-Tyne, Berkshire - and finally in retirement in Ledbury, Herefordshire. Although being an English graduate of two universities and having taught ‘Eng. Lit.’ all her professional life, she never contemplated doing any creative writing herself. It was only when she was sixty-four and well retired, that out of idle curiosity she thought she might try her hand at a short story - just to see what writing fiction felt like. And to her ongoing surprise A Load of Old Bones plus its four sequels was the result. A Little Murder (pub. Allison & Busby) is the first in a new series featuring Rosie Gilchrist, and followed by The Venetian Venture & A Southwold Mystery. The Primrose Pursuit (2016), the first book to feature Primrose Oughterard, is a link to the original ‘Bones’ series.