‘The Whispering City’ by Sara Moliner 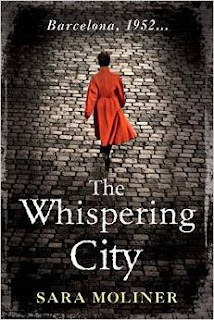 Barcelona 1952. Spain is under the iron grip of the dictator Franco after a bitter civil war between the Republicans, largely left-wing and including Communists and anarchists, and the right-wing Falange, fascist and also clericalist. With the aid of Nazi Germany and Fascist Italy, the Falange vanquished the Republicans and then proceeded to exact a brutal revenge against their defeated opponents. Those who were not executed and buried in mass graves or imprisoned found it virtually impossible to find work and could only survive by hand-to-mouth methods. Members of Republican families were discriminated against and often persecuted. Poverty and fear of the violent methods used by the authorities (particularly the police) ruled; dissent was met with imprisonment or death. Employment opportunities for women were particularly limited.
So Ana Marti Noguer, whose father’s liberal sympathies had made it impossible for him to continue as a journalist, is fortunate to find work on the newspaper Vanguardia albeit reporting only social events. Until, that is, she is assigned to the police investigation by Inspector Isidro Castro of the wealthy socialite widow, Mariona Sobrerroca. It would suit the authorities if the murder could be pinned on some unknown burglar. However, Ana finds a cache of love letters to Mariona and when she and her cousin, the reclusive scholar and philologist Beatriz who is also a victim of the prevailing anti-liberal atmosphere, it seems first of all that the letter writer may have been responsible for Mariona’s murder and then that the letters are both more and less than they had seemed to be at the outset. Their initial investigations, while they answer some of their questions, raise yet more, and with each new discovery the two women are drawn further and further into danger. Most of their friends and associates are too afraid to support them; only another cousin, the young lawyer Pablo Noguer, will stand with them.

Sara Moliner is in fact a pseudonym for two people: Rosa Ribas and Sabine Hoffman. They have written an excellent and most interesting first novel which not only illustrates a recent and important episode in Europe’s recent past but provides a fascinating and intricate puzzle. Strongly recommended.
------
Reviewer: Radmila May

Sara Moliner is the collaborative pseudonym of author Rosa Ribas and Sabina Hoffman, a former professor of philology. The Whispering City is their first novel, which has received critical acclaim since its publication in Spain, as well as an English Pen Award.

Radmila May  was born in the US but has lived in the UK ever since apart from seven years in The Hague. She read law at university but did not go into practice. Instead she worked for many years for a firm of law publishers and has been working for them off and on ever since. For the last few years she has been one of three editors working on a new edition of a practitioners' text book on Criminal Evidence by her late husband, publication of which has been held up for a variety of reasons but hopefully will be published by the end of 2015. She also has an interest in archaeology in which subject she has a Diploma.