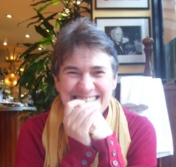 So many authors to discover, so little time to explore... It’s hardly surprising that even the most voracious reader misses out on a few. Until a few weeks ago I’d never come across Charlie Cochrane – though now I have, I can’t imagine why it took me so long.
Since 2008, Charlie has produced fourteen short novels, a dozen novellas and substantial contributions to five collections of short stories – enough to keep six small publishers happy and coming back for more.
She’s a member of Deadly Dames, along with Carol Westron, Joan Moules,
Eileen Robertson and Nicola Slade.
And then there’s the rugby...

Eleven of the fourteen novels form the Cambridge Fellows series, set in early 20th century Cambridge, which suggests both a familiarity with Cambridge and an interest in that period of history. So my first question was...

Lynne: Why Cambridge? Is it a place with a special significance for you?
Charlie: Yes; it’s my university. I went up to New Hall in 1976, to read Natural Sciences, and it was a real eye-opener for a working class, East End girl. I remember walking along Kings Parade thinking, “How on earth did I end up studying here?” I met my husband there, too, so it’s been hugely influential in my life.

Lynne: The early 20th century is a fascinating period of history: a lot of change happening, especially in the lives of women. What made you gravitate towards it?
Charlie: I think it goes back to my reading habits. I have always enjoyed writers from the late 19th  and early 20th centuries. Wilkie Collins, Conan Doyle, Saki and – my particular favourite – Jerome K Jerome. Not forgetting the wonderful WWI poets, like Sassoon and Owen, whom I discovered at O-level and have cherished ever since. It seems a comfortable, familiar era to write in.

Lynne: Is there a secret to capturing a tone which resonates with the period in which a novel is set? How much is down to research?
Charlie: I’m a great believer in accessing as much contemporaneous material as possible. So those Edwardian era novels, newspapers, diaries, letters, etc, all give a feel for the time. They paint a background in which you can work and can give you the authentic cadence of the language for the author to try to reproduce. Not that I believe in filling your work with “Here’s my research, let me show you it”, but the atmosphere and the details need to be convincing.

Lynne: Your work rate is substantial by any standards – more than two dozen titles in seven years. Many aspiring writers would want to know how you fit it all in.
Charlie: There are two bits to that answer. Not all of my stories are full-length by any means; more than half of my stories are novella-length or less – the wonderful world of e-publishing means that I can have a range of lengths and types of stories, sometimes with the same publisher. Regarding my full-length books, several of them were written and stored away – either fully or in part – before I took the plunge into being published. So I had a seam of material I could mine that made up for me being actually quite a slow writer. Alas, that store of ideas and part-written stories is getting on the low side!

Lynne: Do you remember the moment when you first held your book as a book, rather than as a computer file or a pile of manuscript? Did it feel familiar – or completely different from the work you initially sent out? Did you re-read it?
Charlie: I do remember. I was like a child at Christmas. I didn’t re-read it entirely, but I did dip in and pick out some of my favourite bits. And it definitely did read as a better work than it had onscreen. (I suspect that’s psychological, because I prefer print. The computer is fine for my brain downloading words to but not so comfortable for it to upload from.)

Lynne: What brought you to fiction?
Charlie: I’ve always made up stories, whether daydreaming to amuse myself when I was younger (overactive imagination) or to amuse my daughters when they were younger. Once they were growing and I had a bit more time on my hands, it seemed natural to turn to writing. I have to confess that I came into professional writing via fanfiction, but that was a wonderful place to cut my teeth and learn from my mistakes.

Lynne:              Who do you write for? Who is the reader in your mind when you write a new novel?
Charlie:            Me, with my reader’s hat on, and other readers like me who enjoy a good puzzle, light-hearted dialogue and characters you want to know more about, even if you wouldn’t want some of them living next door to you!

Lynne:              How do you go about it? Detailed synopsis first? Just plunge in? When you’re writing a mystery novel, do you know whodunit, or how it ends, before you start?
Charlie: I just plunge in. I have an idea for a setting and maybe some characters (which is how Dame Agatha started her stories off, I believe) then see what they’re up to. I rarely know who did it, which I hope adds an element of freshness to the plot, because I’m discovering as the detectives do. I suspect the diet of weekly radio mysteries I was brought up on is beginning to show its influence here.

Lynne: What ignites a new book in your mind?
Charlie: Characters that keep chattering in my ear insisting that I write more of their story. If they can’t make me want to find out what happens next, how will readers be interested?

Lynne: Your backlist encompasses several genres, including romance and horror. Is there anything you wouldn’t write? Any line you wouldn’t cross – and not just because a publisher wouldn’t accept it?
Charlie: Oh, yes. Anything that I wouldn’t read, for a start, so true crime, explicit sex, gratuitous violence, children being abused – and that’s just for starters. There are some genres I don’t get too excited about, like science fiction, so I’d have no desire to write in that field, but any time I get a reasonable idea, I’m happy to run with it.

Lynne: Apart from the novelist’s desire to tell a good story, what are you aiming for in a novel? Do you set out to open eyes and minds? Or just to entertain?
Charlie: Well, that’s a brilliant question, to which I’m not sure I have a coherent answer. Entertain, first and foremost, because that’s generally what I want from a mystery book when I’m in reader mode. I know from experience that if what I’m reading turns preachy in tone, it’s a bit of a turn-off; I’ve given up halfway through books which I felt were too sermonizing. Yet some writers have a really light touch, and can get a message across subtly, so that’s what I aspire to. If I can open readers’ eyes to the realities of gay relationships in Edwardian times, and give them a cracking read in the process, then it’s win/win.

Lynne: Take us through a typical writing day.
Charlie: Um... I don’t have one. I do some freelance training, and a bit of voluntary stuff, as well as having a hubby who took early retirement and tempts me to go for walks round Iron Age hillforts or play indoor bowls, so writing gets worked around that. I’m fortunate in that I can just sit down and write at the drop of the hat, so I set myself a word count or edit target for the day and make sure I achieve that, somewhere.

Lynne: Promotion plays a big part in a writer’s life these days: hence, I suspect, your membership of the Deadly Dames. Do you enjoy that aspect of your work, or is it a chore to be fitted in when the writing allows?
Charlie: A bit of both. Following on from the previous answer, I believe you have to make time for promo as you make time for writing, whether it’s doing an interview like this or attending an event, with all the concomitant planning, etc. It works best for me if I keep a comprehensive diary of what needs doing and when, so I don’t over-commit on promotion (or other commitments) at some times and under-commit at others. And I’ve discovered lots of ways to make life simpler, like linking up my various social media outlets – and my Amazon author page – so that I don’t have to repost everything.

Lynne: Tell us about you and rugby. You’ve been quoted as saying you resorted to writing because no one would let you manage a rugby team. Which is ‘your’ team? Do you play, or just cheer from the stands?
Charlie: I support Saracens, and I have played once, in university days, and I can tell you it’s a lot easier watching it than being on the field. Even back in the 1970s when we were rubbish. (I’ve been to England vs Wales at Twickenham and I refuse to give the score. Suffice to say it was in 1975 so you can imagine how one-sided it was!) [For the benefit of non-aficionados, the 1970s was a golden era for the Welsh team: Barry John, Gareth Edwards, JPR Willams...]

Lynne: And do please explain, if it’s possible, how writing novels is a substitute for getting down and dirty on the pitch, or even yelling from the touchline as a manager!
Charlie: The rugby manager remark started as tongue-in-cheek, but actually writing is something which gives me almost as much of a buzz as watching Billy Vunipola. [Billy is a back row forward – for the uninitiated, that’s at the back of the scrum – for Saracens and England.]
Lynne:              Have you ever thought about setting a crime novel in a rugby club? What goes on in the scrum is certainly a mystery to most people...
Charlie:            Ah, the dark arts of the front row. What machinations go on there. I’ve never thought of that particular setting for a crime, but I’ll jot the idea down for future reference. Having said that, it’s funny how often my characters play a bit of rugby here and there. My Edwardian detectives both won their rugby blue when at university.

Lynne: And finally – what’s next? Are you working on a new novel at the moment?
Charlie: Yes, the sequel to The Best Corpse for the Job, which was my first contemporary cosy. Given my eccentric (some might say chaotic) way of writing, that means the last chapter isn’t written, while 80% of the book is polished, ready to go!

Contemporary novel:
The Best Corpse for the Job

Novellas:
Home Fires Burning
All That Jazz
The Shade On a Fine Day
Music in the Midst of Desolation
Wolves of the West
What You Will
Dreams of a Hero
Tumble Turn
The Angel in the Window
Promises Made Under Fire
Awfully Glad
Horns and Haloes
Sand