‘Cage of Bones’ by Tania Carver 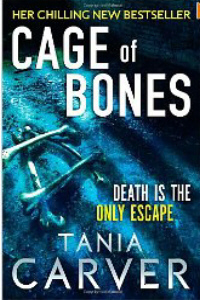 Published by Sphere,
17 September 2011.
ISBN: 978-0-7515-4525-8
Employees of a building company inspecting an old house for demolition, discover a feral child in the cellar imprisoned in a cage of human bones.
Detective Inspector Phil Brennan of the Essex Police Major Incident Squad, calls in his partner psychologist Marina Esposito, to try and talk to the child, but the child can barely form words.

As the CSI and the detectives investigate the cellar it becomes apparent that this is not an isolated incident. They have disturbed a killer who has been operating secretly undetected for many years.
How has this killer operated for so long, where are his victims? And more importantly does he have accomplices that have enabled him to have stayed hidden for so many years?
This is the most action packed thriller that I have read for many a year. The story moves along at a cracking pace. The characters are well fleshed out and each of their lives a story in themselves.  Detective Rose Martin, manipulative and power hungry, who had an affair with DCI Ben Fenwick, and is now is well in with his successor DCI Brian Glass, back on duty after a period of recuperation following her abduction in an earlier case. DS Mickey Philips, who has unexpressed feeling for DC Anni Hepburn -will he ever be able to voice them?  And Faith – what is her story?
It’s not a comfortable book, delving as it does into the depths into which humans can sink. Greed, lust for power, and evil. As Phil Brennan digs around he becomes more and more uncomfortable – but he cannot put his finger on the cause of his discomfort, he only knows something is wrong, but what?  As the hunt for the killer intensifies before he kills again, there are secrets long buried now rising to the surface which will have a profound effect on Brennan, and those around him.
For lovers of a good thriller this is a must.  Atmospheric and plain scary you won’t be able to put it down.
------
Lizzie Hayes
Tania Carver is the pseudonym for the husband and writing team Martin Waits and his wife Linda Waits. Martin Waits is the author of the Joe Donovan crime series set in .
Posted by Lizzie at 16:55