‘A Bespoke Murder’ by Edward Marston 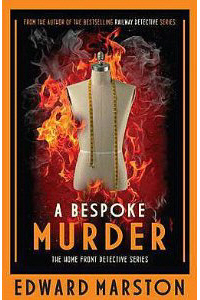 
The sinking of the provokes ferocious revengeful action in her home .  The shops of anyone with a German name are looted, and even naturalised British citizens are not safe but beaten up at random. Sadly this action is soon seen in other major cities. But in matters take a sinister turn when a tailor’s shop on Jermyn Street in is burnt out and the owner killed.  Whilst fleeing from the shop at her father’s insistence Ruth Stein is waylaid by two soldiers and raped.
Assigned to the murder case are Inspector Harvey Mamion and Sergeant Keedy. The former, a family man, the latter a ladies man, but maybe he just needs to meet the right girl.
Whilst the action taken by Mamion and Keedy as they investigate both the murder and the rape, have all the hallmarks of a good detective story, with the satisfying knowledge that the strong arm of the law has a long stretch, much of the strength of the book is in the characters and their lives on the home front during war. Following her recent experience, Irene decides that she will return home to her sister Dorothy in , and find work there.  Ruth Stein a quiet rather sheltered middle-class girl attempts to deal with the dreadful thing that has happened to her and, along with her family, the death of Jacob Stein.
Cleverly plotted, well written and invoking the atmosphere of the time, I heartily recommend this book as an excellent read. I am delighted to see that this is the first in a new series and I look forward to the next one.
-----
Lizzie Hayes

Edward Marston was born and brought up in . He read Modern History at then lectured in the subject for three years before becoming a full-time freelance writer. His first historical mystery, The Queen's Head, was published in 1988, launching the Nicholas Bracewell series. A former chairman of the Crime Writers Association Edward has worked in radio, film, television and the theatre. Edward lives in the Cotswolds with is wife, author Judith Cutler.  A Bespoke Murder is the first in the Home Front Detective series.
Posted by Lizzie Hayes at 18:43