‘A Darker State’ by David Young 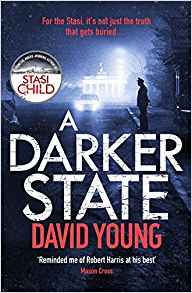 This is the third in this author’s series featuring Karin Muller of the Kriminalpolizei (Kripo) of the People’s Police (Volkspolizei) of the German Democratic Republic (GDR – East Germany, still under the authoritarian rule of the Communist Party). (More detail as to the East German Communist regime in the 1970s is given in the reviews in Mystery People of the author’s two earlier titles, Stasi Child and Stasi Wolf.) Karin has been away from her duties for some time while she gave birth to her twin babies, Jannika and Johannes. Now she is contacted by her boss, Colonel Reiniger, who tells her that a wonderful new apartment awaits her with enough room not only for her, the twins, and their father, hospital doctor Emil Wollenburg, but also Karin’s newfound grandmother Helga. And Karin is to be promoted to Major with a substantial salary increase. She is to head up a new department within the Kripo, a Serious Crimes Department, which will investigate high-profile crimes across the whole of the GDR. And she will have to liaise with the Ministry for State Security – the Stasi – in particular with Colonel Klaus Jager, a man whose ambivalent attitude Karin finds both mysterious and unnerving. Karin fears that, because her investigations of earlier crimes, although successful, did alarm some within the security services, she is being set up as the fall-guy in the continuing rivalry between the Kripo and the Stasi. She knows that she will be watched all the time. But she also knows that she cannot refuse.

Karin is joined in her new job by two colleagues from her old job, Werner Tilsner, still her deputy but now promoted to Captain, and forensic pathologist Jonas Schmidt. Almost immediately they are presented with the body of a boy, and forensic analysis establishes that he was murdered. His name was Dominick Nadel. He had been a member of a football club but had left after some of the members had guessed that he was gay. (Homosexuality had been decriminalised in East Germany in the 1960s but in practice was viciously repressed.) Then Karin’s team find that their enquiry is coming very close to home: Schmidt’s son Markus has disappeared. And he had links to a motorbike club which Nadel had joined after leaving the football club: it is in fact a cover for a meeting place for gay young men. And from there the trail leads to all sorts of places, even into West Germany where politicians and businessmen are being lured into honey traps by gay young men (known as Romeos). And all this is potentially hazardous for Karin’s family life – not to mention Karin’s own life.
Recommended.
------
Reviewer: Radmila May